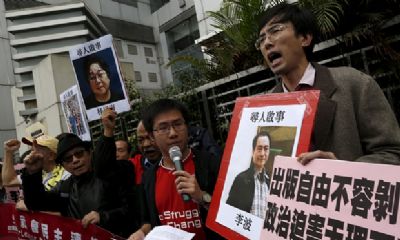 Demonstrators holding portraits of Lee Bo call for an investigation into the disappearance of five members of a Hong Kong publishing house and bookstore. (Tyrone Siu/Reuters)
The suspected abductions of five Hong Kong booksellers who specialised in salacious books about China's Communist party elite are an attempt to stamp out a "smear campaign" against Chinese president Xi Jinping, a source has claimed.

Five men linked to the Causeway Bay Books shop in the former British colony have vanished since mid-October, in southern China, Thailand and, last week, Hong Kong. They include publisher Gui Minhai, the bookshop's 51-year-old owner, and Lee Bo, his 65-year-old business partner.

Government critics describe Lee's suspected abduction to mainland China as the latest sign of Beijing's erosion of civil rights in what is supposedly a semi-autonomous territory.

"Lee Bo's case is a game changer. It shows that 'one country, two systems' has completely collapsed," said Bao Pu, a prominent Hong Kong publisher, referring to the political model introduced after handover in 1997 guaranteeing continued freedom to the territory's residents.

Mystery still surrounds the disappearances of the five booksellers. China has repeatedly denied knowledge of the case, despite growing suspicion that its security forces were responsible for the booksellers' detentions.

On Monday night it emerged that Lee's wife had attempted to withdraw a missing person report filed with Hong Kong police after receiving a faxed copy of a letter, supposedly penned by her husband.

The letter's author, who claimed to be Lee, said he had travelled to mainland China of his own accord to assist with "an investigation which may take a while".

"I am now very good and everything is normal," the author wrote, without explaining how he reached mainland China without his travel documents or attracting the attention of immigration officials.

In an interview about three weeks before his own disappearance, Lee told the Guardian he suspected the disappearance of his partner Gui Minhai on 17 October was linked to a mystery book Gui had been preparing to publish.

Lee sought to distance himself and the other three booksellers who had already gone missing from the title, claiming to not even know its name. "The content of the book was solely Mr Gui's business," he said. "It has got nothing to do with those three guys in Hong Kong. They are just selling books or they were just selling books. They know nothing. They had nothing to do with the content of the book."

Lee said he suspected his colleagues had been taken in an attempt to prevent the publication of the mystery tome.

"I think those people didn't want the book to come out. They got everybody involved in that book to make sure that the book is not out there," he told the Guardian. The Hong Kong-based publishing source, who has direct knowledge of the book's contents, said the volume was to have been called "Xi and his six women".

Despite its title, the book was mainly focused on just one woman, the source said: a Chinese television presenter whom it claimed Xi had known before he married his current wife, Peng Liyuan, in 1987.

Beijing has long been infuriated by the sensational â and often implausible â political exposÃ©s about its leaders' private lives that are produced in Hong Kong and sell like hotcakes among visitors from the mainland, where such material is banned.

But the source claimed Beijing had viewed a recent flurry of titles about Xi Jinping as "a concerted smear campaign" against the Chinese leader, who took power in November 2012.

"They [mainland authorities] might have accepted books critical of other high level cadres, but not of Xi Jinping."

Gui's upcoming tome on Xi's private life was the final straw, the source added. "The mainland authorities decided to shut the whole operation down."

Despite the growing international outcry surrounding the missing booksellers, China has continued to deny knowledge of the situation.

Police officials in Shenzhen, the city in southern China where Lee is believed to be being held, told the state-run Global Times they had " no knowledge of the case".

Speaking before he was taken, Lee said the shadowy nature of Gui's apparent abduction from his holiday home in Thailand would place whoever had taken him in "quite an awkward position".

"You cannot take him to China and put him on trial [and] you just cannot release him because releasing him he will surely be surrounded by a huge number of journalists who ask what happened to him," he said.

"The same applies to the other three guys in Hong Kong," Lee added. "If they are released, how will they answer all the questions. 'Where were you in those days?' And who has abducted you? What kind of questions did they ask?'."
Date
January 5, 2016
Title
‘Smear Campaign’ Against Chinese President Linked to Disappearance of Hong Kong Booksellers, The Guardian
Author(s)
Tom Phillips and Ilaria Maria Sala
Original Source
http://www.theguardian.com/world/2016/jan/05/smear-campaign-chinese-president-linked-disappearance-hong-kong-booksellers
Attachment
Click here to view this document in MS Word/PDF format