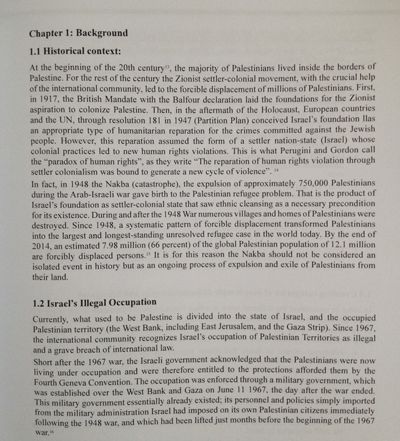 A pamphlet containing the phrase "Israel... saw ethnic cleansing as a necessary precondition of its existence," distributed at UN Human Rights Council side event by Hamas-affiliated NGO, March 21, 2016
In an obscene mockery of "human rights," an NGO affiliated with the terror group Hamas has been given a platform to spread hatred of Israel on the sidelines of the UN Human Rights Council. The UN Secretariat in Geneva is now permitting antisemitic material to be distributed on UN premises, and at UN-advertised events.

Such material, for instance, is distributed at what are called "informal meetings" that are held during the Human Rights Council sessions. UN rooms are allotted by UN staff to UN-accredited NGOs upon request. Requests are approved if facilities are available and if they meet the UN's requirement that - in the words of the request form - "Accredited NGOs in consultative status with the United Nations Economic and Social Council (ECOSOC) may organize information meetings of relevance to the work of the Human Rights Council." The form also stipulates that: "Materials containing abusive or offensive language or images are not permitted on United Nations premises."

These meetings are perceived as fora to influence diplomats and UN staff. As the UN form explains: "NGO parallel events are public meetings and may be attended by NGOs, Permanent Mission Representatives, UN Staff and other persons with access to Palais des Nations."

The meetings are advertised by the UN itself during Council sessions by being posted daily on the UN website under the title "Bulletin of informal meetings."

At the same meeting, featured panelists accused Israel of "apartheid," "war crimes," "crimes against humanity," and "ethnic cleansing." Here is just some of what was alleged at the informal meeting:

Zakaria Odeh, "Civic Coalition for Palestinians, Jerusalem": "So what we are facing really in occupied East Jerusalem in particular and the rest of the combined territories, is a deliberate ethnic cleansing policy."

Munir Nuseibah, Director of "Al-Quds Human Rights Clinic and Community Action Center" [in response to statement from an attendee at the panel that "I would like to make again the analogy of apartheid Israel to apartheid South Africa."]: "First, your comment also on the comparison between the apartheid of Africa and Israel, I agree with you, there is a lot to compare. It seems that there is some colonial mentality that exists in both cases... It is an ethnic cleansing in the way that Israel is actually moving Palestinians out... I would actually say very confidently is that forced displacement ... that Israel is using ... falls under war crimes and crimes against humanity."

Also at this meeting, a PowerPoint presentation was shown featuring an antisemitic slide claiming that Jewish presence in Jerusalem is "discriminatory." The slide states: "The aim of the Israeli discriminatory planning regime is: To strengthen its sovereighnty [sic] by creating a jewish majority in the city."

To the UN, such material isn't abusive or offensive, and is relevant to a Human Rights Council allegedly dedicated to combating intolerance and terrorism.
Date
March 21, 2016
Title
Material distributed at side panel at Human Rights Council Session, “Israel’s Policy of House Demolitions: A Systematic Mechanism of Displacement”
Attachment
Click here to view this document in MS Word/PDF format