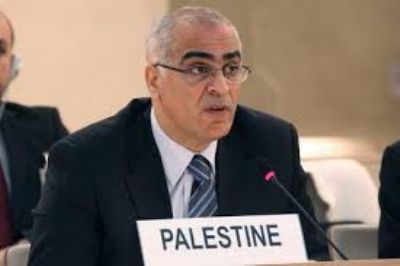 Palestinian representative to the UN Human Rights Council Ibrahim Khraishi
On March 24, 2016, the UN "Human Rights" Council adopted 5 anti-Israel resolutions- 4 more than Syria, Iran, Libya, Yemen, or any other country. The voting was accompanied by one last round of Israel-hatred. Allegations included the following:

Palestinian representative: "Israel repeats its egregious abuse on a daily basis. If you look at the media, you will see how the Israeli soldiers and settlers kill Palestinian children. They shoot them dead. They will leave them to bleed to death for over an hour. The Israeli army prevents ambulances from providing medical care. Is there anything that is more hideous, more heinous than that? ...

Recently, we have tried to make appeals to quell any incitement, any provocation. I'm sure that you're aware that I refer to provocations of Israelis. Prime Minister Netanyahu launched the following idea. He claims that the Mufti al-Husseini convinced Hitler of the need for a holocaust. Then he launched another slogan. He said that there is a great difference between Jewish terrorism and Arabic terrorism. And then the leading rabbi made comments, which appeared in the press, whereby he claimed that killing a Palestinian is an offer that one makes to God and that when Palestinians call for an end to the occupation, they are doing quite the opposite... The settlers have for the first time formed an armed militia..."

Representative from Saudi Arabia: "Mr. President, six decades and more have passed and unfortunately we are still witnessing the shedding of the bloods of our brothers and sisters in the Palestine by the occupation forces in Israel, that has not even taken a child or an elderly person or a woman as an exception in a total absence of ethics and unprecedented defiance of all international resolutions and international legitimacy... Israel has blood on its hands and the Council should not remain passive."