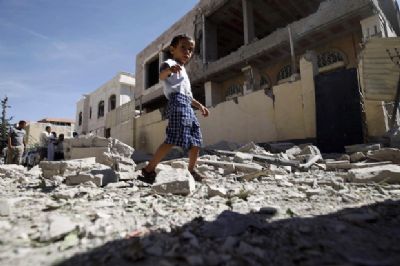 A Yemeni child walks past a house damaged by a Saudi-led air strike in the Yemeni capital Sanaa (Reuters/Mohamed al-Sayaghi)
On May 27, 2016, the UN released a report of the UN Secretary-General on children and armed conflict, which concluded that the Saudi-led coalition in Yemen was responsible for the killing and maiming of hundreds of children. According to the report, "The United Nations verified ... 1,953 child casualties (785 children killed and 1,168 injured)... Of the casualties, 60 per cent (510 deaths and 667 injuries) were attributed to the Saudi Arabia-led coalition... Of the attacks on schools and hospitals, 48 per cent were attributed to the coalition..."

The report included the Saudi-led coalition in its annex, entitled: "List of parties that recruit or use children, kill or maim children, commit rape and other forms of sexual violence against children, or engage in attacks on schools and/or hospitals, or abduct children in situations of armed conflict on the agenda of the Security Council" The Annex serves in effect as a blacklist of parties that kill, injure, and abuse the human rights of children in armed conflict.

After the report was released, Saudi Arabia threatened to cut ties with the UN and urge other member states of the Organization of Islamic Cooperation to follow-suit if the Secretary-General did not remove it from the blacklist.