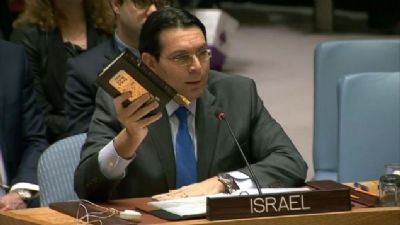 "Mr. President, today is a dark day for this Council. The resolution we just voted on is the peak of hypocrisy. While thousands are being massacred in Syria, this Council wasted valuable time and efforts condemning the democratic state of Israel for building homes in the historic homeland of the Jewish people.

Secretary-General Ban Ki-moon, addressing this very Council one week ago, said that the UN has, and I quote, 'a disproportionate volume of resolutions, reports, and conferences criticizing Israel.' This resolution today will be added to the long and shameful list of anti-Israel UN resolutions.

The world is undergoing great change and the new Secretary-General will soon assume office. I call on this Council to take this opportunity to turn a new page, put an end to the bias and obsession with Israel, stop this endless attempt to blame all the problems of the Middle East on the one true democracy in the region, and make clear to the Palestinians that the only way, the only way forward, is to end incitement and terror and to enter into direct and meaningful negotiations with Israel.

Read the resolution. Tomorrow night Israel and the entire Jewish community around the world will celebrate the holiday of Hanukkah. Over 2,000 years ago King Antiochus banished the Jewish people from our temple in Jerusalem and issued decrees trying to sever us from religion and our heritage, but we prevailed. The Jewish people fought back. We regained our independence and relight the menorah candles in the temple.

We have full confidence in the justice of our cause and in the righteousness of our paths. We will continue to be a democratic state based on the rule of law and full civil and human rights for all our citizens. And we will continue to be a Jewish state, proudly reclaiming the land of our forefathers where the Maccabees fooled their oppressors and King David ruled from Jerusalem.

This holy book, the Bible, contains 3,000 years of history of the Jewish people in the land of Israel. No one, no one, can change this history."
Date
December 23, 2016
Title
Statement of Israel at the Security Council meeting on the Situation in the Middle East, including the Palestinian question (7853rd meeting), Unofficial Transcript by Human Rights Voices
Original Source
http://webtv.un.org/watch/the-situation-in-the-middle-east-including-the-palestinian-question-7853rd-meeting-security-council-7853rd-meeting/5259919093001
Attachment
Click here to view this document in MS Word/PDF format