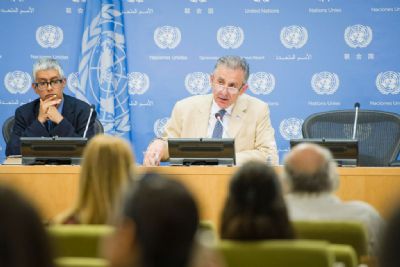 Jean-Paul Laborde, Executive Director of the UN Counter-Terrorism Committee Executive Directorate (CTED), at a press briefing (File photo)
The UN may not have a definition of terrorism, but that isn't going to stop a lead UN counter-terrorism expert from demanding more money and resources for a new UN counter-terrorism operation. The ask came from the so-called UN "special rapporteur on protecting human rights while countering terrorism," a mandate that deliberately places countering terrorism on the opposite side of protecting human rights.

The recommendation was made in Ben Emmerson's report to the UN Human Rights Council, that is currently in the middle of a month-long session in Geneva.

"...the Special Rapporteur strongly recommends the establishment of a new office of Under-Secretary-General for counter-terrorism coordination, whose responsibilities would include, at their core, the protection and promotion of human rights while countering terrorism and which would work in close cooperation with, and on the advice of, OHCHR [Office of the High Commissioner for Human Rights]."
Date
February 21, 2017
Title
Report of the Special Rapporteur on the promotion and protection of human rights and fundamental freedoms while countering terrorism, A/34/61, Office of the High Commissioner for Human Rights
Original Source
http://www.ohchr.org/EN/HRBodies/HRC/RegularSessions/Session34/Documents/A_HRC_34_61_EN.docx
Attachment
Click here to view this document in MS Word/PDF format