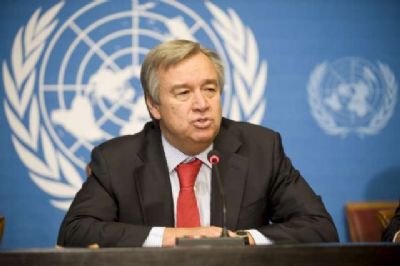 UN Secretary-General Antonio Guterres (File photo)
A newly released report issued by UN Secretary-General Antonio Guterres accuses Israel of damaging Palestinian social and economic conditions, while minimizing Israeli security concerns and whitewashing Palestinian responsibility for their own conditions. The report was drafted by the infamous Lebanon-based Economic and Social Commission for Western Asia (ESCWA), a UN commission which was recently forced to withdraw a report accusing Israel of apartheid and whose former head resigned in wake of the scandal. However, the Secretary-General had no problem putting his name on the new report, which maintains ESCWA's anti-Israel bias.

The report includes a litany of complaints and allegations against Israel:
Date
June 14, 2017
Title
Economic and social repercussions of the Israeli occupation on the living conditions of the Palestinian people in the Occupied Palestinian Territory, including East Jerusalem, and of the Arab population in the occupied Syrian Golan, A/72/90âE/2017/71, Note by the Secretary-General
Original Source
http://undocs.org/A/72/90
Attachment
Click here to view this document in MS Word/PDF format