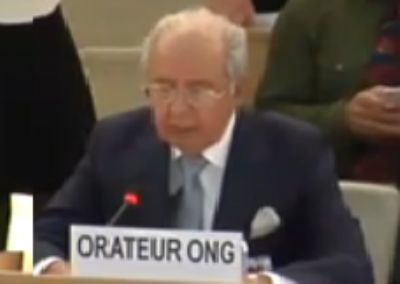 "In 2017, it is 100 years since the Balfour Declaration, a document which endorsed the colonial project that led to the Nakba, the mass displacement of the Palestinian nation. As such we call on Britain to apologise for the injustice of its actions, which are still affecting Palestinians to this day. Through the Balfour Declaration, Britain helped establish Israel as a settler colonial state. Israel continues to dominate the over 13 million Palestinians thorough an Apartheid regime, colonial policies and military occupation."
Date
September 25, 2017
Title
Oral statement by the Palestinian Return Centre Agenda Item 7, 36th session of the UN Human Rights Council, UN Office of the High Commissioner for Human Rights
Original Source
https://www.extranet.ohchr.org/sites/hrc/HRCSessions/HRCDocuments/16/NGO/16513_56_8b002488_a0fd_464e_8de0_699021f06ff7.docx
Attachment
Click here to view this document in MS Word/PDF format
Note
To access original source:
Username: hrc extranet
Password: 1session