Bomb hurled at IDF troops on Gaza border as 1,600 protest 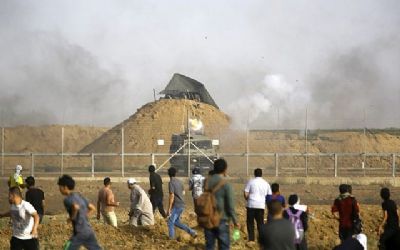 Palestinians face off with Israeli forces during weekly clashes along the border between Israel and the Gaza Strip, east of Gaza City, on May 25, 2018
An explosive device was thrown Friday at Israeli troops along the Gaza border in the Strip's north, the army said, as Palestinians took part in weekly clashes near the security fence.

The army said no soldiers were injured by the bomb.

It said some 1,600 Palestinians took part in riots at two locations along the border, where they threw rocks and burned tires. Numerous attempts were made to damage security infrastructure, the army said.

Gaza's Hamas-run health ministry said 86 people were injured. Most were treated for tear gas inhalation while some sustained gunshot wounds.

Also during the afternoon several incendiary kites were flown into Israel from the Palestinian coastal enclave, sparking fires. Strong winds hampered efforts to douse the blazes, though all were eventually brought under control.

Friday's clashes were part of the weekly "March of Return" protests that began on March 30. Israel says they are orchestrated by the Hamas terror group, which rules Gaza, and used as cover for attempted terror attacks and breaches of the border fence.

The violent demonstrations were meant to end on May 15, but Hamas leaders have said they want them to continue. Turnout at the past two weeks' clashes has been far smaller than previous weeks.

Yasser Habib, 24, was wounded several days ago east of Gaza City, the ministry said. It did not give details of exactly when he was shot.

According to the ministry's figures, 115 Palestinians have died since the start of the weekly protests in March, which reached their peak on May 14 when 61 people died.

Separately Friday, the army said an estimated 87,000 Palestinians from the West Bank travelled to Jerusalem for Ramadan prayers.

It also said 8,000 Palestinians prayed at the Tomb of the Patriarchs in the southern West Bank city of Hebron.

"IDF troops are deployed in reinforced numbers and are operating along with the Shin Bet, Civil Administration, Border Police and Israel Police in order to allow the Ramadan prayers, as well defending communities and roads and preserving order and security in the area," the army said.