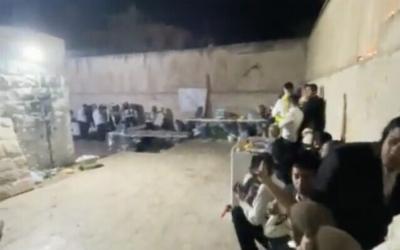 Jewish worshipers are seen at Joseph's Tomb in the city of Nablus on June 30, 2022, amid clashes between Palestinians and the IDF. (Screen capture: Twitter)

The clashes erupted as hundreds of Jewish worshipers under military escort arrived to pray at Josephâs Tomb on the outskirts of Nablus. According to the Israel Defense Forces, armed Palestinians directed âmassive gunfireâ at the compound.

âIDF soldiers returned fire toward the source of the shooting,â a statement from the military said.

Among the injured Israelis was Col. Roy Zweig, who heads the Samaria Regional Brigade in the northern West Bank. The military said he was taken to a hospital to be treated for a likely shrapnel wound. The other two Israelis who were hurt are civilians.

The Israel Defense Forces said troops evacuated all the worshipers from Nablus.

In videos shared on social media, gunshots could be heard as worshipers huddled in the courtyard of the shrine.

The Palestinian Islamic Jihad terror group later claimed responsibility for the shooting, saying it came in response to the death of a member amid a clash with IDF troops a day earlier in Jenin.

âWe affirm that we will remain highly prepared to confront the occupation forces and their crimes against our people, our land, and our holy sites,â it said in a statement.

âWe wonât relinquish our grip on Josephâs Tomb,â said Samaria Regional Council chief Yossi Dagan, who was at Josephâs Tomb during the clashes.

Jewish pilgrimages to Josephâs Tomb are usually allowed only once a month under heavy security. During these visits, Palestinians routinely throw rocks at the troops, and frequently attack them with Molotov cocktails and gunfire.

In April, the shrine underwent a major renovation under heavy guard after Palestinians twice broke into the site and vandalized it. Zweig, the commander wounded early Thursday, made headlines at the time after ignoring IDF Central Command chief Yehuda Fuchsâs orders not to invite reporters to accompany the soldiers and settlers repairing the site.