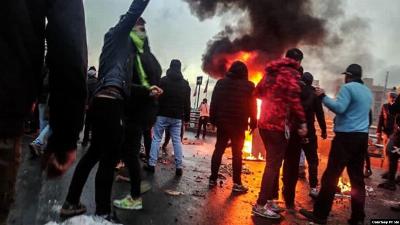 Iranian authorities announced on Monday they will hold public trials for 1,000 people in the capital, Tehran, over the protests that have convulsed the country. The mass indictments mark the governmentâs first major legal action aimed at quashing dissent since unrest erupted over six weeks ago.

Iranâs state-run IRNA news agency quoted judicial officials as saying that a thousand people who had a central role in the protests would be brought to trial in Tehran alone over their âsubversive actions,â including assaulting security guards, setting fire to public property and other accusations.

The nationwide protests first erupted over the Sept. 16 death of 22-year-old Mahsa Amini in the custody of the countryâs morality police. She was detained for allegedly violating Iranâs strict dress code for women. Although the protests first focused on Iranâs mandatory headscarf, or hijab, they have since transformed into one of the greatest challenges to the ruling clerics since the chaotic years following the 1979 Islamic Revolution.

âThose who intend to confront and subvert the regime are dependent on foreigners and will be punished according to legal standards,â said Iranâs judiciary chief, Gholam-Hossein Mohseni Ejei, indicating that some protesters would be charged with collaborating with foreign governments. Tehran officials have repeated unsupported claims that Iranâs foreign enemies have fomented the unrest.

âWithout a doubt, our judges will deal with the cases of the recent riots with accuracy and speed,â he said.

Security forces have dispersed gatherings with live ammunition and tear gas over the weeks of sustained protests. At least 270 people have been killed and 14,000 arrested, according to the group Human Rights Activists in Iran. Demonstrations have continued â even as the feared paramilitary Revolutionary Guard has warned young Iranians to stop.

Ejei claimed that prosecutors sought to differentiate between angry Iranians who merely sought to vent their grievances on the streets and those who wanted to take down the theocracy.

âEven among the agitators, it should be clarified who had the attention of confronting the system and overthrowing it,â he said.

Judicial authorities have announced charges against hundreds of people in other Iranian provinces.

Some have been accused of âcorruption on earthâ and âwar against God,â offenses that carry the death penalty.