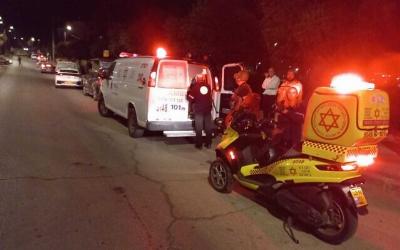 A photo from the Magen David Adom ambulance service shows the scene of a terror shooting attack near the West Bank settlement of Kiryat Arba on October 29, 2022. (Photo courtesy Magen David Adom)

A Palestinian terrorist opened fire near the West Bank settlement of Kiryat Arba on Saturday night, killing an Israeli man and wounding four other people, one of them seriously, the military and medics said. The gunman was later rammed by a security official and shot dead by an off-duty soldier.

The initial shots were directed at a Jewish father and son who had been shopping at a convenience store owned by a Palestinian, between Kiryat Arba and Hebron.

The father, in his 50s, was critically injured and was later pronounced dead at Jerusalemâs Hadassah Ein Kerem hospital. He was later named as Ronen Hanania.

The seriously injured man was a medic â Ofer Ohana â who was apparently shot by the attacker as he arrived on the scene to assist the other victims, which included two Israelis â aged 19 and 49 â and a Palestinian bystander, all of whom suffered mild injuries.

The shooting occurred near the entrance to a Jewish settlement neighborhood in Hebron, known as Givâat HaAvot. The neighborhood is located just west of the larger settlement of Kiryat Arba.

Prime Minister Yair Lapid and Defense Minister Benny Gantz vowed to take strong action against any others found to be involved in the terror attack.

Ohana, a Magen David Adom medic who reached the scene with another first responder to treat the wounded, was shot by the gunman and seriously hurt, the ambulance service said.

A local security officer then reached the scene and rammed the gunman with his car, before an off-duty soldier shot him dead, CCTV footage of the incident showed.

The alleged terrorist was named by Palestinian media as Muhammed Kamel al-Jabari, a member of the Hamas terror group, whose brother Waal had been serving life in Israeli prison before being freed and deported to the Gaza Strip in the Gilad Shalit prisoner swap deal in 2011.

Images circulated on social media showed that after the attack, sweets were handed to drivers in Hebron in celebration, fireworks were fired, and there were chants heard in support of terror mastermind Muhammad Deif.

Ohana, the medic, who is also in his 50s, was taken to the Shaare Zedek Medical Center in the capital was listed in serious condition. The other two Israelis were in good condition, according to Hadassah Ein Kerem.

MDA added that its medics treated a Palestinian man from Hebron, 37, who was lightly injured in the attack. He was taken by the Red Cresent to a West Bank hospital.

In footage shared on social media, gunshots could be heard in the area.

Shortly after the attack, a 27-year-old Israeli was lightly hurt when stones were hurled at his car near the West Bank settlement of Maâale Amos, medics said. He was taken to Shaare Zedek with a head injury.

Several hours later, the military said shots were fired toward Israeli troops from a passing vehicle near the Palestinian town of Bani Naâim, without causing injuries. The soldiers shot back at the gunmen, who fled by car.

Gantz instructed officials to âformulate operational measures according to the situation,â his office said in a statement.

Gantzâs office added that security forces would capture any involved in the attack, and wished the victims a full recovery.

Prime Minister Yair Lapid said he was praying for the wounded in the shooting, and hailed Israeli forces who âneutralizedâ the Palestinian assailant.

In a statement, Lapid said reinforcements would be deployed to the area. âTerror wonât defeat us, weâll take strong action,â he vowed.

Public Security Minister Omer Barlev mourned the victimâs death, adding that âPalestinian terror will not break or beat us. We will continue to fight it will all determination and strength, day and night.â President Isaac Herzog, meanwhile, said he was âshockedâ by the attack, and offered prayers for the quick recovery of those wounded.

The shooting came amid heightened tensions in the West Bank.

Another Israeli was killed in a suspected attack last month, and four soldiers have been killed in the West Bank in attacks and during the arrest operations.