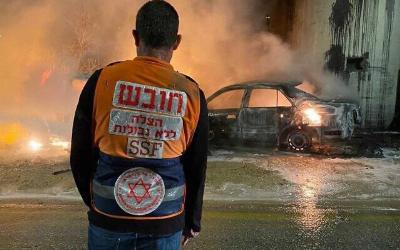 Palestinian rock throwing attacks against Israeli drivers have been on the rise in the West Bank, Israeli outlet Ynet reported Sunday, prompting victims to draw attention to the escalation and call for improved security.

In one such incident, an Israeli woman was driving to her home in Elazar, south of Jerusalem, around midnight on Thursday, when a block weighing around nine pounds suddenly âflew towards me, penetrated the windshield and hit my forehead.â

âBy a miracle I kept on driving, and called my father in order to tell him Iâm on the way home,â recounted Hila Lehm, whose face was visibly injured during the interview with Ynet. âBlood was pouring from my forehead, glass and blood were in my mouth, my whole face was bloodied.â

âI managed to drive another ten minutes to Efrat,â after which she was met by the military and evacuated to a hospital, where she received stitches.

Another vehicle was also attacked at the same spot on Thursday, shortly past midnight. In the car were married couple Tam and Malahi Zamir and their young neighbor, who were returning to Gush Etzion, an Israeli settlement bloc in the Judean Hills, after a performance in Jerusalem.

The rock-thrower âstood at the side of the road, in the dark,â recounted Tam on social media. âFor a fraction of a second, I noticed him, and wanted to warn Malahi [the driver] to pay attention, in case he crossed the road.â

âSuddenly he raised his hand and I understood what was about to happen. The rock (block) hit our car, the side window shattered on me and glass flew throughout the car. There was panic, but we understood that we had to drive quickly to a safe location.â

She said the vehicleâs occupants sustained small scratches on their hands, face, and eyes, and found shards of glass all over their bodies.

âWhen they say, âstone throwing,â you think of a small pebble of sorts â but theyâre blocks. Theyâre blocks that can kill,â Malahi told Ynet.

âThe terrorists that feel legitimized to stand on the side of the road and throw blocks, need to feel it isnât legitimate,â said Tam during the interview. âWe live here, and will continue to live here â¦ we want the decision-makers to legitimize the security forces to act against this.â

Late last month, the drivers of two Israeli buses that were attacked by stone throwers near Jerusalem also spoke out about their experiences, with one driver â who said glass flew all over his body and into his mouth â saying that he now wears sunglasses at night to protect his eyes. Weeks earlier, Israeli ministers pledged to act following an uptick in stone-throwing attacks on buses in the countryâs southern Negev desert.

Rock throwing attacks have led to multiple casualties and fatalities in Israel. This August, an Israeli woman was moderately wounded by Palestinian stone throwers while driving on Route 60, close to where an Israeli man and his infant son were killed by stone throwers in 2011.