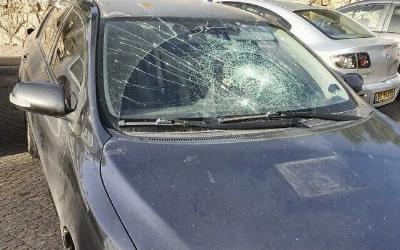 The smashed front window of an Israeli car after a Palestinian allegedly hurled a cinderblock at the vehicle near the West Bank settlement of Beit El, May 13, 2022. (Courtesy)

A Palestinian man hurled a cinderblock at a car carrying Israeli civilians in the West Bank before being shot by a soldier Friday morning, according to the military.

A Palestinian man hurled a cinderblock at a car carrying Israeli civilians in the West Bank before being shot by a soldier Friday morning, according to the military.

The Israel Defense Forces said the suspect was spotted by a soldier who was passing the area, near the Beit El settlement, as he threw the cinderblock and also tried to open the door of the vehicle.

A photo showed the smashed windshield of the car.

The soldier, who was on reserve duty, fired at the suspect under the militaryâs arrest protocol, an IDF statement said, adding that he was taken to a hospital for medical treatment after the incident. The statement did not specify the suspectâs condition but Hebrew media reports said he was seriously wounded.

The military also said a knife and bottle of acid were found on the suspect.

Video of the incident showed the Palestinian throw the cinderblock and try to open the carâs door, as a white van that a soldier was driving stops on the other side of the road.

The soldier can then be seen with his rifle drawn running after the Palestinian, who appears to charge toward the serviceman with a large stone in hand before being shot.

Meanwhile, a police commando was killed in an exchange of fire between Palestinian gunmen and Israeli soldiers in the northern West Bank town of Burqin, where the IDF said forces from the military, Shin Bet, and elite police counter-terror units were conducting an operation.

The military said five Palestinians who were suspected of involvement in terror activities were arrested.

Video from the area circulating on social media showed a pair of masked Palestinian gunmen firing a pistol and rifle, as heavy exchanges of fire could be heard.

Clashes were also reported in the Jenin refugee camp.

Several Palestinian terrorists behind recent deadly attacks hailed from Jenin and its environs. Israeli forces have been carrying out raids in the area, including an operation early Wednesday in which a prominent Al Jazeera journalist was shot dead during clashes between armed Palestinians and Israeli soldiers, further ratcheting up tensions.

It is not yet clear who shot Shireen Abu Akleh. Palestinian Authority President Mahmoud Abbas has accused Israel of âexecutingâ her. Israeli officials have declared that it is too soon to determine who fired the bullet that killed her. Israel is investigating and asked the PA to join the probe, which it has refused to do. Defense Minister Benny Gantz was quoted telling foreign reporters on Wednesday night that it could have been âthe Palestinians who shot her,â or fire from âour side.â