U.N. Inaction on Iran
All Actions of the UN Human Rights System Critical of Specific States, 2008 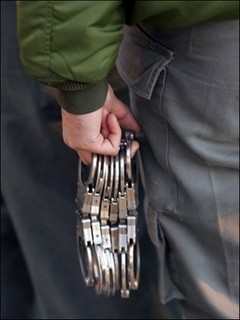 "A prison officer holds sets of handcuffs in December 2007. Iran has amputated the right hand and left foot of five criminals convicted of armed robbery and hostage-taking, the student ISNA news agency has reported."
Source: AFP/File/JackGuez

Spate of Executions and Amputations in Iran

TEHRAN - "Using strict enforcement of Islamic law, the judicial authorities in a restive region of southern Iran amputated the right hands and left feet of five convicted robbers this week, part of what the government said was an effort to deter other troublemakers.

An Iranian rights group led by Shirin Ebadi, the lawyer and Nobel Peace Prize winner, protested the double amputations, which it called an expansion of cruel punishments in Iran. The group also protested a spate of public executions reported over the past two weeks.

"Unfortunately, the violation of human rights in Iran has not only been expanded in some fields, it has also found new dimensions," Ms. Ebadi's group, which calls itself Defenders of Human Rights, said in a statement.

Iranian newspapers on Thursday reported the hanging of seven men convicted of murder and drug smuggling in different cities this week. In the first 10 days of January there have been 23 publicly disclosed executions.

"Figures confirm that executions have increased in Iran," Ms. Ebadi said in an interview. "We have issued statements several times and have said that we are against punishment by death."

Iran has been an active user of the death penalty, usually hanging, and is one of several countries that opposed its abolition last month during a vote on the United Nations General Assembly resolution, joining in an unusual alliance with the United States. Officials argued that the abolition of the death penalty would be an infringement on Iran's sovereignty.

Amputation has been a punishment in Iran since the Islamic revolution of 1979 installed Islamic law, but Iran's judicial authorities have rarely publicized examples of its use and have rarely ordered double amputations. In the newly publicized instances, the courts ordered the right hand and left foot cut off, making it difficult, if not impossible, for the condemned to walk, even with a cane or crutches.

A statement by the Judicial Branch in Sistan-Baluchistan Province, where the convicted robbers were punished, said it hoped the double amputations would "teach a lesson to other criminals," the news agency ISNA reported.

It was not clear when this week the amputations were carried out. Reports said doctors watched to limit bleeding and infection during the procedure.

"It doesn't matter how often these sentences are issued; even once is not acceptable, and our laws should change," Ms. Ebadi said. "We have constantly protested the existence of such punishments in our penal code. But the government ignores our protest."

The amputations were done in Zahedan, the provincial capital near the Pakistan border, where the authorities have faced increasing insecurity because of the Sunni minority in the region. Iran's population is overwhelming Shiite.

Iran has waged a large-scale campaign this year aimed at improving security in Sistan-Baluchistan. At least some of those reported executed so far this year had been arrested during the campaign.

The authorities hanged 13 people on Jan. 1 and three others after that.

According to a count by Agence France-Presse, based on reports in local newspapers, Iran hanged 298 people in 2007, compared with 177 hangings in 2006.

The executions this year were carried out ahead of the mourning month of Muharram that began Thursday under the lunar calendar. Under Islamic law, executions are forbidden for the month.

Among those reported executed on Jan. 1 was a 27-year-old woman and mother of two who killed her husband when she was 23. The woman, Raheleh Zamani, was hanged at Tehran's Evin prison despite a promise by the authorities to postpone her execution by a month. A group of feminists were trying to get the consent of the victim's family to save her life. She had married at the age of 15 and had been abused by her husband, Ms. Ebadi said."