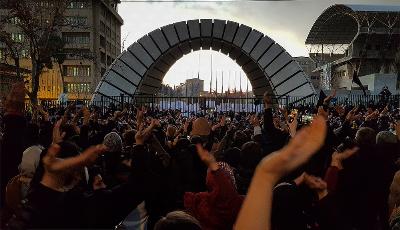 Iranian security forces appear to have fired tear gas and pellet guns at protesters in the central city of Isfahan in what activists say is the most violent government crackdown on dissent in the Islamic republic since July.

Video clips posted to social media and vetted by VOA Persian appear to show Iran's security forces using violent tactics to disperse hundreds of people who gathered Friday on the dry bed of Isfahan's Zayandehrud River to protest the government's handling of a water shortage crisis in the region. VOA cannot independently confirm the events depicted in the videos because it is barred from reporting inside Iran.

In some of the videos, several Iranians could be seen with bloodied heads and backs bruised by pellets as they tended to their wounds with the help of others. Some protesters also could be seen throwing stones at security personnel as the clashes spilled into the streets adjacent to the riverbank.

Many of the demonstrators chanted anti-government slogans used in past eruptions of opposition protest in Iran in recent years, such as "Death to the dictator," a reference to Iranian Supreme Leader Ayatollah Ali Khamenei.

There was no immediate comment from Iranian state media regarding how many people were wounded or arrested in Friday's crackdown.

Mahmood Amiry-Moghaddam, the director of the Oslo, Norway-based group Iran Human Rights, and Jason Brodsky, the policy director of the U.S. advocacy group United Against Nuclear Iran, told VOA it was the most violent crackdown they had seen on protests in Iran since July. That month, Iranian security forces fired tear gas and pellets to suppress protests against water shortages in the drought-stricken southwestern province of Khuzestan.

After the July crackdown, London-based rights group Amnesty International said it had determined that Iranian security forces killed at least eight protesters and bystanders in seven cities, based on video footage and "consistent accounts" from Iran-based sources. Iranian state media reported the killings of at least four people in the Khuzestan protests, including a police officer, and blamed the deaths on saboteurs.

In Friday's Isfahan protest, the Iran Human Rights group said in a statement that Iranian security forces used batons, tear gas, pellets and live ammunition against demonstrators. It expressed "grave concern" about the situation and urged the international community to "immediately respond to stop the state repression and killing of defenseless civilians."

Asked by VOA what the U.S. State Department thought of Iran's handling of the Isfahan protest, a spokesperson said it was "closely following the reports and recent developments of protests against water shortages in Iran."

"The Iranian people have a right to freely voice their frustrations and hold their government accountable," the spokesperson added.

NetBlocks, a London-based internet monitoring group, confirmed Friday via Twitter a reduction in internet connectivity in parts of Iran from Thursday morning Iran time. Iranian authorities have previously disrupted internet and mobile services to try to stop anti-government protesters from mobilizing and sharing protest images with the outside world.

NetBlocks director Alp Toker told VOA he had not been able to track connectivity levels in Isfahan. But he said there was a collapse in connectivity in Ahvaz, capital of Khuzestan, where the last major water shortage protests began and spread to other provinces in July.

Brodsky said Friday's crackdown in Isfahan showed that the Iranian government "resorts to overwhelming force plus early internet and mobile outages as a formula for repressing the Iranian people, who are asking for water but are met with bullets."

The Isfahan protest was the culmination of a peaceful sit-in by farmers who set up tents on the dry Zayandehrud riverbed near the city's centuries-old Khajoo bridge on November 8. Thousands of residents joined the farmers in a peaceful protest at the site on November 19. But social media videos posted Thursday appeared to show the farmers' tents ablaze, and activists accused the security forces of setting the fires to clear the sit-in.

Experts have blamed Iran's long-running drought not only on lower than usual rainfall but also on years of government mismanagement of the nation's water resources.

In a Friday interview on VOA Persian TV, Tehran-based Iranian sociologist Saeed Madani said Iran's bad water management was hurting farmers not only in Isfahan and Khuzestan but also in the west-central province of Chaharmahal and Bakhtiari and the northeastern province of Golestan.

"Iranians protest issues that have become chronic and undermined and threatened the livelihood, security and the survival of the people. The [water shortages] are caused by a crisis in the fabric of Iran's governing structures," Madani said.

"Since Iran's governing body does not have an answer to the calls of the protesters and cannot solve the problem, the only solution it believes to be working against the protesters is to violently suppress them," he said.