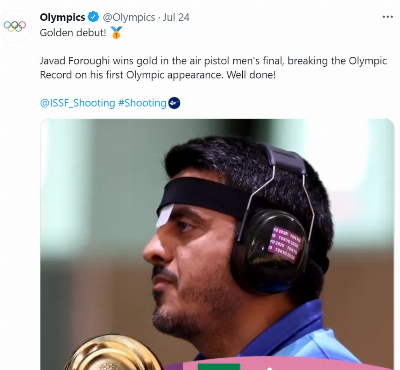 The Iranian human rights athletic organization United for Navid on Saturday slammed the International Olympics Committee for posting a tweet in praise of an Iranian marksman Javad Foroughi, who won a gold medal at the Tokyo Olympics because he is a member of a US sanctioned terrorist organization.

In a statement sent to The Jerusalem Post, United For Navid wrote that it âconsiders the awarding of an Olympic Gold Medal to Iran marksman Javad Foroughi not only a catastrophe for Iranian sports but also for the international community, and especially the reputation of the International Olympic Committee (IOC). The 41-year old Foroughi is a current and longtime member of a terrorist organization [IRGC].â The Olympics sent a congratulatory tweet to its more than six million followers with a picture of Foroughi, writing âGolden debut! First place medal. Javad Foroughi wins gold in the air pistol menâs final, breaking the Olympic Record on his first Olympic appearance. Well done! @ISSF_Shooting #Shooting.â

United for Navid is named after the executed champion Greco-Roman wrestler Navid Afkari, who was imprisoned and tortured by the Islamic Republic of Iran for his participation against the theocratic regime in 2018. The regime executed Afkari in September. Masih Alinejad ,the Iranian-American journalist and womenâs rights activist, along with the Iranian-American former Greco-Roman wrestler Sardar Pashaei, spearhead the campaign. Pashaei coached Iranâs Greco-Roman national team and was a decorated international wrestler.

United for Navid said the IRGC âhas a history of violence and killing not only of Iranian people and protesters there, but also innocent people in Syria, Iraq and Lebanon. The IRGC is a designated foreign terrorist organization by the United States.â

Iranâs regime has a played a critical role in advancing Syrian dictator Bashar Assadâs war against his population, which has resulted in the deaths of more than 500,000 people in the fragmented country. United For Navid noted that it wrote âto the IOC earlier this year and warned them about the possible presence of the military and even politicians serving as athletic representatives of Iran. Officials of the IOC never took any action. Awarding an Olympic gold medal to a member of a terrorist organization is an insult to other athletes and a black mark on the IOC. United for Navid calls for an immediate investigation by the IOC, and until an investigation is completed the suspension of any medal award.â

Ellie Cohanim, the Iranian-born former US deputy special envoy to monitor and combat antisemitism at the US State Department, tweeted: âWhat a disgrace for the Olympics. This guy has been outed as a member of the IRGC a designated terrorist organization.â Twitter, the micro-blog platform, was ablaze with criticism of the IOC from Iranians for the praise.

The Iranian-American human rights activist Lawdan Bazargan tweeted: âIranâs Revolutionary Guard Corp is the equivalent of SS or âpolitical soldiersâ of the Nazi Party of Hitler. I was arrested in June 1985 by IRGC members when I was 16 & spent 2 weeks in their jails before transfer to Evin prison. Why @Olympics allows a member of IRGC to compete?â

The radical pro-Iranian regime paper Javan showed a picture of Foroughi delivering a military salute on the podium. âAn unexpected medalâ¦ won by a Guards nurse who is at the same time a defender of health and of the shrine,â the paper reported.