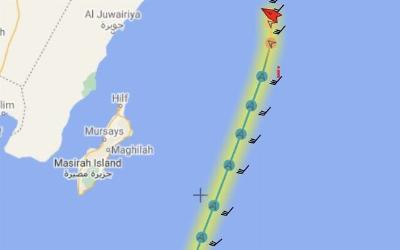 Two crewmen, a British and Romanian national, died in an attack on an oil tanker operated by an Israeli-owned company off the coast of Oman on Thursday night, the company said.

An Israeli security official who spoke on condition of anonymity told the Associated Press that Israel believes Iran was behind the attack on the ship, citing similar attacks in the past.

Analysts said the attack bore all the hallmarks of tit-for-tat exchanges in the âshadow warâ between Israel and Iran, in which vessels linked to each nation have been targeted in waters around the Gulf.

âWith profound sadness, we understand the incident onboard the M/T Mercer Street on 29 July, 2021 has resulted in the deaths of two crew members on board,â Zodiac Maritime said in a statement on Friday afternoon.

An unnamed US official told the Associated Press it appeared that a so-called âsuicide droneâ was used in the attack. Iran and Yemenâs Tehran-backed Houthi rebels have employed âsuicideâ drones in the past, unmanned aircraft loaded with explosives that detonate on impact with a target.

The assault represented the worst-known maritime violence so far in regional attacks on shipping since 2019. The US, Israel and others have blamed the attacks on Iran amid the unraveling of Tehranâs nuclear deal with world powers.

An unnamed senior Israeli official cited by Channels 12 and 13 news said the Romanian fatality was apparently the captain, while the British man was a security guard.

Zodiac Maritime is a London-based company belonging to Israeli tycoon Eyal Ofer. Earlier this month, a UAE-bound vessel previously owned by Oferâs company was struck in the northern Indian Ocean.

The company said that while it operates the Liberia-flagged âMercer Streetâ oil tanker, the owner of the ship is Japanese.

It added on Friday it was not aware of any other injuries apart from the two crewmen who died.

âOur primary concern remains the safety and well-being of everyone on board and all those affected by the situation. Details of the incident are still being established and an investigation into the incident is currently underway,â the company added.

It later said the ship was âsailing under the control of her crew and under her own powerâ¦ to a safe location with a US naval escort.â

A brief initial statement earlier from the British militaryâs United Kingdom Maritime Trade Operations said an investigation was underway into the attack, which it described as happening late Thursday night just northeast of the Omani island of Masirah. The location is over 300 kilometers (185 miles) southeast of Omanâs capital, Muscat.

âWe continue to work closely with the UKMTO and other relevant authorities,â Zodiac Maritime said.

Javedanfar said Iranians âfeel badly disadvantaged when it comes to responding to attacks inside Iran which have been associated to Israelâ, including an April strike on the Natanz uranium enrichment site reportedly executed by Israel.

An attack on a maritime vessel âis one area where [Iranians] feel they can try to at least retaliate,â he added.

But he assessed the fundamental dynamics of the rivalry would change little. âBoth sides will continue what theyâre doing,â he said.

Israeli officials did not immediately acknowledge the incident, but it comes amid heightened tensions between Israel and Iran as negotiations remain stalled over Tehranâs nuclear deal with world powers.

Other Israeli ships have been targeted in recent months, as have vessels tied to Iran, amid a shadow war between the two nations, with Israeli officials blaming the Islamic Republic for the assaults.

The UKMTO statement did not elaborate, other than to say that it suspected the attack did not involve piracy. Earlier on Thursday, the British military group had said it was investigating another unexplained incident in the same area, but it did not elaborate.

In recent months, Israel and Iran have accused each other of attacking a number of merchant ships, damaging them with explosives. The vessels in each case were only lightly damaged and there were no injuries in the incidents.

Another Israeli-owned vessel reportedly came under missile fire in the Gulf of Oman in late March, possibly by Iranian forces.

The Wall Street Journal reported in March that Israel has targeted at least 12 ships bound for Syria, most of them transporting Iranian oil, with mines and other weapons.

Iranian media did not immediately acknowledge the attack Friday.