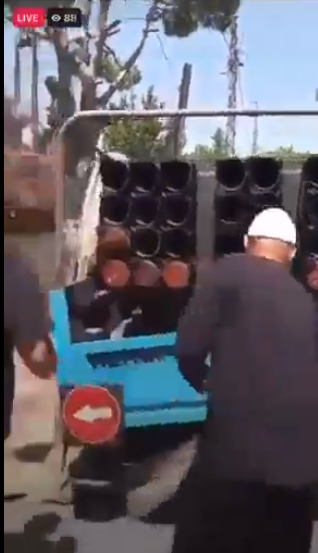 Hezbollah fires barrage of 19 rockets at Israel, in first since 2006 war

Nineteen rockets were fired at northern Israel from Lebanon on Friday morning, sending residents in a number of towns in the Golan Heights and Galilee Panhandle scrambling to shelters. The Hezbollah terror group later acknowledged responsibility for the barrage, in a first since the 2006 Second Lebanon War.

The Israel Defense Forces said 10 projectiles were intercepted by the Iron Dome missile defense system and six landed in open around Mount Dov. Another three rockets failed to clear the border and landed in Lebanese territory, according to the military.

The alarms sounded shortly before 11 a.m. in Ein Quiniyye, Neveh Ativ and Snir, near Israelâs northern border with Lebanon and Syria.

The Iran-backed Hezbollah terror group confirmed it had fired the projectiles, which it said came in response to recent Israeli airstrikes in Lebanon. Several previous rocket attacks on Israel have been attributed to Hezbollah, but it has not acknowledged responsibility.

Thursdayâs early morning Israeli airstrikes were in response to a previous rocket attack from Lebanon on Wednesday.

There were no immediate reports of casualties or damage in Fridayâs rocket attack. The Magen David Adom ambulance service said it was not aware of any injuries.

The IDF said it had begun a wave of artillery strikes toward the source of the rocket fire.

The military added that there were no special instructions for residents in the area. âRoutine civilian life adjacent to the Lebanese border should be maintained,â the IDF said in a statement.

Gantz held an earlier meeting with Kohavi and other senior officers, with a statement from his office saying he stressed âthe importance of maintaining close contact and providing the home front with ongoing updates.â

The UN peacekeeping mission in Lebanon, known by its acronym UNIFIL, said Friday the situation was âvery serious.â

âUNIFIL has detected rocket launches from Lebanon and return artillery fire by Israel. This is a very serious situation and we urge all parties to cease fire,â UNIFIL said in a statement.

Military spokesperson Ran Kochav told reporters on Friday that Israel has âno intention of going to war, but we do not want to turn the Lebanon border into a line of confrontation.â

He also asserted Hezbollah intentionally fired the rockets at open areas. Still, the Iron Dome system was activated to intercept some of the rockets, which is usually only done when projectiles are heading for populated areas, military bases or key infrastructure.

âThis is a moderate response from Hezbollah, as to not escalate the situation,â Kochav said.

Later Friday, a defense official said the country reserves the right to respond to the rocket attack on northern Israel as it sees fits.

âThe Israel Defense Forces is currently taking action with large-scale strikes in Lebanon, mostly with artillery and with strikes on infrastructure with fighter jets, as we havenât done for years,â the official said in a statement.

âThe defense establishment is preparing additional options for a response through different means â overt and covert â in accordance with developments [in the field]. The continuation of our activities will be in accordance with operational needs and a timeframe that is best suited for Israel,â he said.

Meanwhile, the Hamas terror group expressed its âfull supportâ for Hezbollahâs decision to launch rockets at the âZionist enemy,â saying the Lebanese terror group was challenging Israeli attempts to impose its own rules of engagement.

Hezbollah is establishing a formula in which âbombing will be reciprocated by bombing, and those who commenced [the hostilities] are the ones at fault,â Hamas said, referring to Israelâs Thursday strikes inside Lebanese territory.

âThe battle with this enemy must remain an open one until [Israel] disappears,â Hamas added.

Recent attacks had been blamed on local Palestinian groups in Lebanon, and not the powerful Hezbollah. However, Hezbollah maintains tight control over southern Lebanon, making it unlikely that such attacks would be conducted from this area without at least its tacit approval.

On Wednesday, three rockets were fired into northern Israel from Lebanon. Two rockets hit open areas, while the third fell short of the border.

In response, the Israel Defense Forces fired artillery shells at targets in Lebanon just after the attack. Some two hours later it followed up with a second and a third round before conducting airstrikes toward âterror infrastructureâ and rocket launching sites, according to the military.

Rocket fire from Lebanon has been exceedingly rare in the 15 years since the 2006 Second Lebanon War Israel fought against Hezbollah, though it has occurred sporadically. Recent months, however, have seen a slight uptick, with 10 launches aimed at Israel during Mayâs 11-day war in Gaza, as well as last month, leading to fears among some that the phenomenon could become more common, as has happened in areas on the Gaza border.

Israel has conveyed to Lebanon via UN peacekeepers that it could intensify its response if calm is not returned to the border.

âWithout getting into the identity of who shot the rockets, itâs clear that the Lebanese government bears full responsibility for any fire at the State of Israelâs territory,â the IDF said in a Hebrew-language statement. âThe Lebanese state lacks control over terror groups operating within it.â