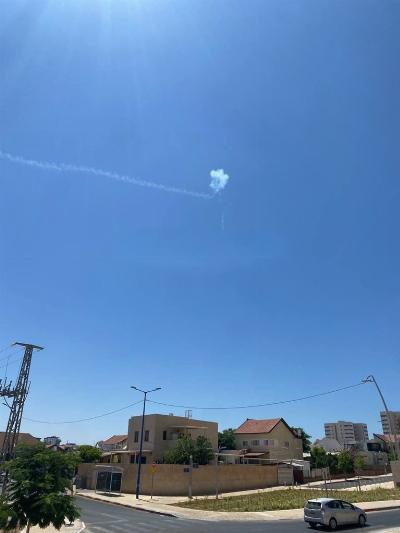 Palestinian terrorists fired two rockets from the Gaza Strip toward the town of Sderot on Monday afternoon in what appeared to be the first such attack since Mayâs 11-day conflict in the Palestinian enclave, the military said.

The Iron Dome missile defense system intercepted one of the rockets, while the second landed inside the Gaza Strip. The attack triggered sirens in Sderot, as well as the the communities of Ivim, Nir Am and Erez in the Shaâar Hanegev region of southern Israel, according to the Israel Defense Forces.

âOne launch was spotted from the Gaza Strip, which was shot down by air defense soldiers,â the IDF said in a statement.

No injuries or damage were reported in the rocket attack. The IDF did not immediately retaliate to the launches.

Video footage (above) from a surveillance camera inside Israel showed the two rockets being fired from an area near the border.

The launch came after repeated threats by Palestinian terror groups in recent weeks over the slow pace of Gaza reconstruction and the entrance of Qatari money into the Strip, following Mayâs conflict, known in Israel as Operation Guardian of the Walls.

The various terror groups in the Gaza Strip, chiefly Hamas and the Palestinian Islamic Jihad â known collectively as the joint operations room â were scheduled to gather later Monday to determine how to proceed in their ongoing ceasefire negotiations with Israel, but called off their meeting, apparently fearing an IDF strike.

Shaâar Hanegev Mayor Ofir Liebstein called on the government to respond to the rocket launch, saying the attack was particularly heinous considering it took place in the middle of the day.

âThis is the first launch since Operation Guardian of the Walls, which ended some two months ago. Until now, the operation had proven itself and I hope and expect that the State of Israel knows how to retain the deterrence that was put in place after the operation,â Liebstein said in a statement.

âAny launch, even if it is intercepted, interrupts our daily lives, especially when it is at a time when children are in summer activities and not at home with their parents. Luckily and unfortunately, the educational teams in our region are experienced in dealing with such things and they are now helping children get back to their routines in the best and healthiest way possible,â he added.

Following the May conflict, Israel said it would only allow basic humanitarian aid into the beleaguered enclave, unless the Gaza-ruling Hamas terror group released two Israeli civilians whom it has held in captivity for years, along with the remains of two IDF soldiers.

Israel later eased away from that condition, gradually scaling back its blockade of Gaza and allowing more and more goods and people into and out of the Strip, at the request of the United Nations and foreign governments.

In a further bid to put pressure on Israel, some terror groups have turned to the tactic of launching balloon-borne incendiary devices into Israel from Gaza in recent weeks, sparking many fires in the area near the border and damaging at least one home and large swaths of nature reserves and agricultural land.

Last Friday, Israel announced it would allow 1,350 Palestinians from Gaza to enter Israel to work, provided they are vaccinated or recovered from COVID-19.

The military tied the move to the relative quiet in the region, after a week had passed since balloons carrying incendiary devices launched from the coastal enclave sparked a number of fires in southern Israel.

In addition, Israel said it would allow further imports and exports through the Kerem Shalom Crossing. Beginning this week, the import of transportation and communications equipment was permitted, as well as materials for humanitarian infrastructure in Gaza, such as sewage and water, according to Israelâs military liaison to the Palestinians, the Coordinator of Government Activities in the Territories.

COGAT said the moves were âconditioned on continuing security stability in the region.â

Hamas has warned of a return to fighting should Israel seek to again tighten restrictions on the blockaded Strip.

Israel and Egypt impose tight restrictions on Gaza, which they say are necessary to prevent a greater threat from the Stripâs Hamas rulers.

The terror group took over Gaza in a 2007 coup against the Palestinian Authority.