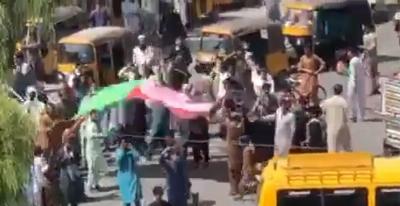 Taliban fighters killed at least three people Wednesday as they fired at protesters who tried to replace the Islamist regimeâs flag with the national one of Afghanistan, according to reports.

In what is believed to be one of the first protests since the ousted group took back control of the country Sunday, âhundreds if not thousandsâ of locals took to the streets of Jalalabad on Wednesday, Al Jazeera said.

Many were seen waving the red, black and green national flag â with some climbing a flag pole in the cityâs central square to take down the Talibanâs white flag in a stunning expression of defiance.

But Taliban enforcers started firing in the air â with some shots aimed at the crowds, according to footage on social media and local reports.

Others also attacked the crowds with batons while a military-style vehicle was seen racing dangerously through the crowds.

At least three people were killed and more than a dozen injured, two witnesses and a former police official told Reuters.

The deadly violence appeared to be yet further proof that the insurgent regime could not be trusted in its claim Tuesday that there would be a âhuge differenceâ between the Taliban now and the brutality the Islamic group enforced 20 years ago.

Mujahid even claimed that women would be allowed to work and study and âwill be very active in society but within the framework of Islam,â a stark contrast to the previous oppression, despite remaining vague.

Even since then, however, the Taliban have been seen randomly attacking people â leaving women and children bloodied â and even blamed for shooting dead a woman who refused to wear a burqa.

Alleged criminals have also been seen paraded through the streets with blackened faces and nooses around their necks, seemingly in a return to the draconian punishments that included public executions and mutilations.

Distrust of the groupâs claims of peace are also painfully clear in shocking scenes of thousands of people flooding Kabul airport in desperation to leave the nation â even clinging to planes as they take off, with some seen plunging to their deaths.

âEveryone wants out,â said one Afghan man who arrived in Frankfurt on Wednesday with his wife and son on a flight via Tashkent. âWe saved ourselves but we couldnât rescue our families.â