U.N. Inaction on Pakistan
All Actions of the UN Human Rights System Critical of Specific States, 2021 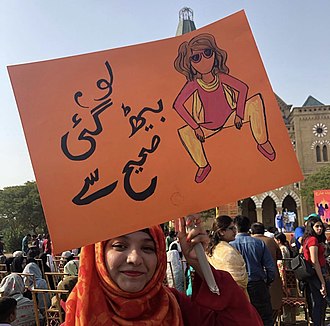 Police in Pakistan have opened cases against hundreds of unidentified men after a young woman was sexually assaulted and groped by a crowd of more than 400 men in a park in Lahore as she made a TikTok video.

The shocking assault was captured on several videos, which went viral and showed a mob descend on the woman as she was in Lahoreâs Greater Iqbal park making a TikTok video with friends. In broad daylight, the men picked up the young woman and tossed her between them, tearing her clothes and assaulting and groping her.

The woman registered a case against 300 to 400 unidentified persons with Lahore police, according to the case report seen by the Guardian.

âThe crowd pulled me from all sides to such an extent that my clothes were torn. I was hurled in the air. They assaulted me brutally,â the woman said in a statement to the police. She said the crowd also stole her money, earrings and a phone.

The footage prompted a wave of disgust and anger in Pakistan. The countryâs information minister, Fawad Chaudhry, said arrests were being made. Some perpetrators have been identified through CCTV footage and eyewitness accounts. Chaudhry said: âWe are working on it full throttle. Prime minister has taken notice also.â

Activists, politicians, celebrities, Amnesty International and people across Pakistan expressed their anger over the assault. The chairperson of the Pakistan Peopleâs Party, Bilawal Bhutto Zardari, said the incident should âshame every Pakistaniâ and that it âspeaks to a rot in our societyâ.

The Pakistani singer Farhan Saeed said he was âdisgusted, furious, heartbroken, ashamed that the men of this country keep doing these horrible acts every other dayâ.

The Pakistani senator Sherry Rehman said a recent implosion of violence against women suggested the problem was worsening in Pakistan. âMost cases are mostly either ignored, buried or brushed aside in the patriarchal culture of silencing the victim,â she said.

Pakistan is the sixth most dangerous country in the world for women, according to the Thomson Reuters Foundation. The Karachi-based organisation War Against Rape estimated that less than 3% of rape cases lead to convictions.

The prime minister, Imran Khan, has come under scrutiny for suggesting the rise in rape and assault cases was to be blamed on how women dressed and behaved. âIf a woman is wearing very few clothes it will have an impact on the men unless they are robots,â said Khan in an interview in June. âIf you raise temptation in society to a point â and all these young guys have nowhere to go â it has a consequence in the society.â

Rehman said Khanâs comments were âa reflection of our culture of sexism and misogyny. By saying women should dress a certain way, he is giving oppressors and criminals against women a new narrative to justify their behaviour.â

Women who have been fighting against violence and Pakistanâs patriarchal system have faced attacks and abuse and been slapped with false blasphemy and vulgarity charges. The organisers of Aurat March, the annual womenâs march to fight for womenâs rights, have faced harassment by religious groups and the police.

An organiser of the march, who had eight different police cases filed against her, which were later dismissed by the court, and requested to remain anonymous, said: âThe government must consider this a national crisis. I really hope the government, after all these incidents, will stop blaming victims and terming them isolated incidents. It should engage with the womenâs movement on the rising violence against women in the country.â

In July, Khanâs government was criticised by rights activists when news surfaced that it had sent the domestic violence protection and prevention bill 2021, designed to offer protection to women under threat from domestic violence, to the Council of Islamic Ideology (CII) for review. The body, made up entirely of men, examines laws to ensure they align with the values and rules of Islam.

Last week, the CII criticised the bill and shared its concerns over âun-Islamic injunctionsâ and said it would destroy the institution of the family.

Chaudhry said the government was dedicated to bringing women into politics and that the prime minister believed in empowering women. However, he said that âwe need to change mindsets to prevent such crimes from happeningâ.

A female student at the National College of Arts in Lahore, requesting anonymity, said the women of Pakistan lived in fear of being groped or assaulted, and being blamed for any attacks. âI have to think twice as to what I should wear before going out just so I donât come off as provocative in front of my [taxi] driver. Now going out for work has become an extreme sport, because you must think twice and you canât be careless at any point.â