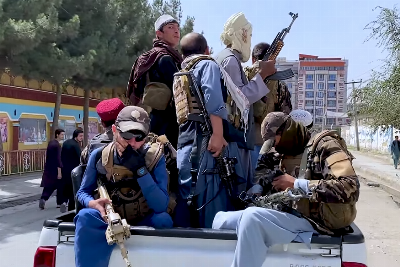 Horrifying audio of distant gunshots appears to confirm reports of "house-to-house executions" as the Taliban asserts control of Kabul and Afghanistan after the U.S. military's departure on Monday evening.

An Afghan man who worked with Americans on the ground provided Fox News with the chilling audio featuring distant gunshots.

"I think there's a conflict between the Taliban, I have no idea where I'm located. From everywhere I hear the sounds of shooting, gunfire. I have no idea how to leave," the Afghan man said in the audio clip, recorded around the time the final U.S. plane left Kabul.

Distant gunshots rang in the background in the audio clip.

President Biden did not deny a Politico report, confirmed by Fox News, that U.S. officials in Kabul gave the Taliban a list of American citizens, green card holders, and Afghan allies in an effort to grant them entry to the airport which resulted in outrage from military officials behind the scenes.

The president said "there may have been" such a list. "Basically, they just put all those Afghans on a kill list," one defense official told Politico.

Retired 2-Star Army General Vincent Boles told Fox News that the Taliban should not get too comfortable.

"Be careful what you ask for," Boles said. "Now they have to show they can govern a nation and people that are very different than when they left power. Will the Taliban go forward to the future or pull Afghanistan back to the past? The answer will be in their behaviorâ¦ behavior is believable."

Last Wednesday, a former translator for a high-ranking U.S. Army Ranger told Fox News the Taliban had started executing allies of the U.S. in public, in provinces away from the media attention of Kabul.

"They are not doing really bad stuff in Kabul right now because there's a lot of media focus on Kabul, but they already started public execution in other provinces where a lot of media is not available or covering it," the interpreter said.

What's more, in holding to his Aug. 31 withdrawal deadline, President Biden appears to have broken his promise to stay in Afghanistan until every American has been evacuated.

"We did not get everybody out that we wanted to get out," Marine Corps Gen. Kenneth F. McKenzie Jr., commander of U.S. Central Command, admitted Monday evening.

On August 18, Biden had told ABC News' George Stephanopoulos that the U.S. military's objective in Afghanistan was to get "everyone" out, including Americans, Afghan allies, and their families.

"That's what we're doing now, that's the path we're on. And I think we'll get there," he said. "If there's American citizens left, we're gonna stay to get them all out."

Yet a senior State Department official told Fox News that a "small number" of Americans remained in Afghanistan, putting the number at "below 250."