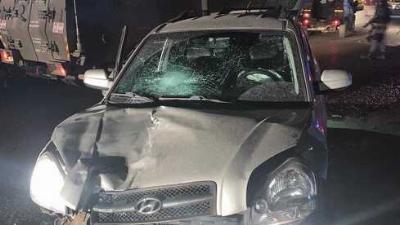 A Border Police officer was seriously wounded early on Thursday in an apparent car ramming at the Qalandiya border crossing on the West Bank north of Jerusalem.

Israeli forces stationed at the checkpoint opened fire at the vehicle after it began speeding towards them before crashing into a wall. The driver, a 22-year-old resident of the West Bank city of Qalqilya, was apprehended and transferred to the custody of the Shin Bet security service for questioning.

The 20-year-old officer was taken to Jerusalemâs Shaare Zedek Medical suffering from moderate injuries to his head and abdomen. However, the hospital later reported that his condition deteriorated overnight to serious but stable.

Jerusalem District Commander Doron Turgeman said that the suspected attack serves as a reminder of the dangers posed by terrorists to Israeli troops and civilians.

"The troops' vigilance and their quick and determined response is the key to saving lives," Turgeman said.

The Qalandiya checkpoint has been a target of other terrorist attacks in the past, the last of which came in July when a Palestinian opened fire at Israeli security forces stationed there before fleeing in the direction of Jerusalem.

The suspected terrorist arrived at the border crossing in a car with an Israeli license plate and began shooting at the forces who returned fire. One man was slightly injured.

The suspect's car was found abandoned shortly after the attack and the driver was located nearby and apprehended. His gun was found under the driver's seat.