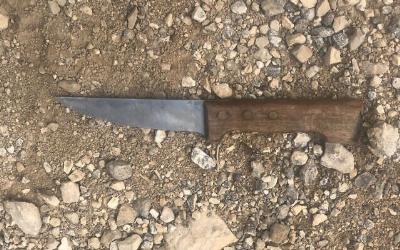 A knife in the possession of a Palestinian woman who approached a Jewish community near Jerusalem, October 18, 2021. (Israel Police)

Border Police officers arrested a Palestinian woman armed with a knife as she approached an Israeli settlement outside Jerusalem on Monday, police said.

The suspect, whom Palestinian media identified as Samah Bakrawi, 37, from the village of Bayt Surik, was spotted by Israeli soldiers monitoring security cameras as she walked up to a locked gate into the Har Adar settlement.

Border Police officers were quickly sent to the scene and called for the woman to halt, according to police.

âThe officers made the arrest without the use of gunfire as the suspect threw away the knife from her hand,â police said.

She was taken into custody for further questioning, according to a police statement.

Israeli security forces have in the past noted a phenomenon of Palestinians attempting so-called âsuicide by copâ by acting in a suspicious or threatening manner with the hope that they will be shot dead by Israeli troops.