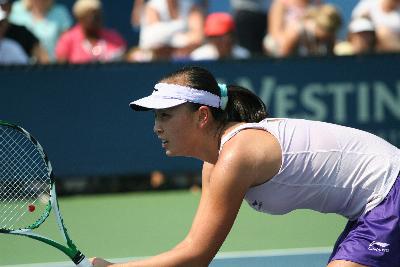 Tennis players across the world have called for an investigation into allegations Peng, 35, made in a social media post describing sexual abuse she suffered at the hands of former vice-premier Zhang Gaoli.

Peng claimed Zhang, 75, forced her to have sex despite repeated refusals following a round of tennis three years ago. She further claimed Zhang's wife guarded the door during the incident.

"Yes, aside from myself, I kept no evidence, no recordings, no videos, only the real experience of my twisted self. Even if Iâm destroying myself, like throwing an egg against a rock, or a moth flying into a flame, I will still speak out the truth about us," the now-deleted post said.

The post was quickly deleted from her verified account on Weibo, a leading Chinese social media platform, but screenshots of the explosive accusation quickly spread across China's internet.

Chinaâs state-controlled media appears to have suppressed any reporting on the case. Peng also disappeared from the public since making the post two weeks ago, raising questions about her whereabouts and whether she is being detained.

Asked repeatedly about the case, China's Foreign Ministry spokesperson Zhao Lijian said again on Thursday that he is unaware of it. Chinese celebrities have faced oppression and censorship in their country whenever they criticize actions by the government or officials â especially if those comments cast a light of impropriety on the nation.

Searches for Peng Shuaiâs name on Chinaâs Sogou search engine turn up only articles about her tennis career. Her account on Weibo no longer allows comments, and no results turn up if people search for her Weibo account.

China has largely suppressed a #MeToo movement that flourished briefly in 2018 and is forging ahead with the Beijing Winter Olympics in February despite boycott calls by activists and some overseas politicians over China's human rights record.

In the email, Peng insisted that the allegations of sexual assault were "not true," and Peng further claimed she was neither "missing" nor "unsafe." She asked that any information WTA planned to publish first receive her approval.

But Simon said that the email only raised further concerns and doubts about Pengâs safety.

"The statement released today by Chinese state media concerning Peng Shuai only raises my concerns as to her safety and whereabouts," Simon wrote in a statement. "Peng Shuai must be allowed to speak freely, without coercion or intimidation from any source."

Simon has demanded a full investigation, and the WTA said it is prepared to pull tournaments out of the country if it doesnât get an appropriate response.

Tennis players have called for action by the WTA and Association of Tennis Professionals (ATP).

Four-time majors winner Naomi Osaka posted a statement on Twitter with #WhereIsPengShuai, saying "Censorship is never ok at any cost."

"I hope Peng Shuai and her family are safe and ok," Osaka wrote. "Iâm in shock of the current situation and Iâm sending love and light her way."