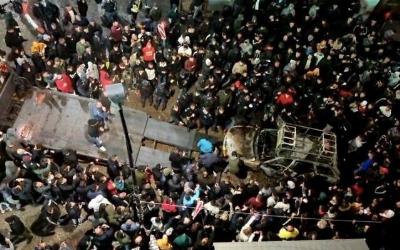 Two Israelis were attacked and their car was set ablaze by a crowd of Palestinians after they entered downtown Ramallah on Wednesday night.

It was not immediately clear why the two had found themselves near al-Manara Square in the de facto Palestinian Authority administrative capital, well away from the major checkpoints leading to the site.

Police identified one of the Israelis as a resident of the West Bank settlement of Shiloh; the other lives in the mostly Ultra-Orthodox Israeli city of Elad. Both are members of the Bratslav Hasidic sect, according to media reports. According to an Israeli security official, the two claimed they sought to reach Hashmonaim, a settlement about a half-hour drive west of Ramallah.

One of the Israeli men reportedly blamed an Arab man for giving them bad directions when they stopped at a gas station near Eli, a settlement northeast of Ramallah. In an apparently coordinated leak, several Hebrew media outlets published the same quote from his interrogation by soldiers following the incident.

âHe directed us to continue straight and to go past all the traffic circles. Somewhere along the way I realized we were not going in the right direction, and then what happened happened â cinderblocks and stones,â he allegedly said.

After their car was torched, the two Israelis were extracted by Palestinian Authority security forces. Under Ramallahâs policy of security coordination, PA forces work to prevent Palestinian terror attacks against Israelis and extricate Israelis who stumble into Palestinian areas of the West Bank.

The two Israelis were subsequently held for interrogation by Israeli police. They did not suffer serious injuries during the incident, according to the Israeli army.

A Palestinian Authority police spokesperson referred The Times of Israel to the PA security forces, who did not respond to requests for comment.

Pictures of the two Israelis showed them with long hairstyles and the types of clothing preferred by both young Bratslav Hasidim and ultra-nationalist settler youth. In addition, some Bratslav community members are known for driving around blasting Jewish techno music from speakers mounted atop garishly painted vehicles, often getting out to dance at intersections or during traffic jams, especially during holidays.

Pictures of the car in Ramallah showed what appeared to be mounts for large speakers, though its not known if the two made any sort of scene as they drove through the city.

Hamas praised the assault on the two Israelis as an âact of resistance.â The terror group, which seeks Israelâs destruction, regularly condemns the PA for its policy of coordinating with Israel on security.

âThis must continue with force and spread all across the West Bank,â said Hamas spokesperson Fawzi Barhoum.

âThe duty of the PA security services is to protect our people from settler attacks and to confront them side by side, not to safeguard them and return them to the enemy,â Barhoum said.