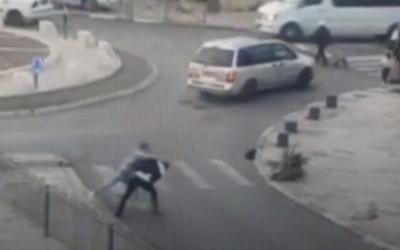 A Palestinian stabs a Haredi man in Jerusalem before being shot dead by police on December 4, 2021 (video screenshot)

Taxi driver to be charged with aiding terrorist in Jerusalem stabbing

Police said Monday that a man suspected of aiding a Palestinian terrorist who committed a stabbing attack near Jerusalemâs Old City earlier this month would soon be indicted over his role in the attack.

Separately, two female teenage suspects were remanded in custody for an additional four days over another stabbing attack, in the capitalâs Sheikh Jarrah neighborhood, last week.

In the first case, a Palestinian assailant stabbed a Jewish civilian near Damascus Gate in Jerusalem on December 4 and then attacked two Border Police officers, who subsequently shot him dead. The civilian was seriously wounded in the attack.

In a statement Monday, police said a 48-year-old taxi driver from Kafr Qasim had been arrested shortly after the attack, and that the man had now been arraigned in court and remanded in custody for four more days ahead of a formal indictment for allegedly aiding the terrorist.

Police said the driverâs investigation had ended, concluding that he had given a ride to the terrorist â a Palestinian without a permit to enter Israel â from a roadblock near the West Bank city of Qalqilya to a place near Damascus Gate in Jerusalem, where the attack was carried out.

The statement did not specify if the man was suspected of knowingly aiding the terrorist or was aware he was entering Israel illegally.

The manâs taxi has been confiscated, the statement added.

The attack happened on Saturday near the Old City in Jerusalem. The assailant was seen crossing a street, then turning and repeatedly stabbing an ultra-Orthodox man behind him. He then ran at the responding officers.

The attacker was later identified as Muhammad Salima, a 25-year-old from the West Bank town of Salfit who was in Israel illegally.

The victim of the attack, Avraham Elmaliach, 21, was stabbed in the neck.

The officers were questioned after video of the incident showed them firing at Salima when he was already lying on the ground. But the State Prosecutorâs Office later closed an investigation into the officers, saying in a statement: âAn examination of all the circumstances found that this was an incident that lasted only a few seconds, in circumstances where there was a real and tangible danger to the lives of the officers and civilians in the area.â

In a separate suspected terror attack days later, an Israeli woman was lightly injured when an attacker plunged a foot-long (30 centimeter) knife into her back as she walked her five children to a daycare in the flashpoint East Jerusalem neighborhood of Sheikh Jarrah.

Police said the suspect was a 14-year-old girl who lives in Sheikh Jarrah. A member of a well-known local family, the suspect lives in a home that, like many in Sheikh Jarrah, is embroiled in a court battle with Jewish groups that have contested the propertyâs ownership.

Police said Monday that the remand of two teenage girls had been extended â the suspected stabber and a second who allegedly helped her after the attack and tried to eliminate incriminating evidence.

The investigation in their case is still ongoing. Court hearings in the case are being held behind closed doors due to the suspectsâ age.