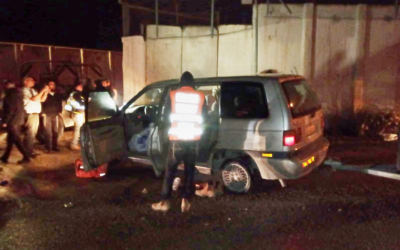 The scene of the terror attack where one Israeli was killed, December 16, 2021. (Photo courtesy UNITED HATZALAHâ)

One Israeli dead after terror shooting attack in West Bank

Two terrorists shot towards a car in the West Bank, killing one of the three Israelis inside, in a terror attack on Thursday night.

The three, students of the Homesh yeshiva, were driving on the road from the former Homesh settlement and the Shavei Shomron settlement in the northern West Bank. The man suffering from the gunshot wound was evacuated to the Rabin Medical Center-Beilinson Campus in Petah Tikva for further medical care, while the other two, lightly injured, were treated at the scene.

Palestinian factions in Gaza, including Hamas and the PIJ, praised the attack. IDF is scanning the area and has blocked major highways off.

"I send my condolences to the family of the terror victim and wish a speedy recovery to the injured," tweeted Prime Minister Naftali Bennett.

"Israeli security will find the terrorists quickly," he added.

"These killers will never break us. We will continue to build up the West Bank," tweeted Religious Services Minister Matan Kahana.