U.N. Inaction on Ethiopia
All Actions of the UN Human Rights System Critical of Specific States, 2022 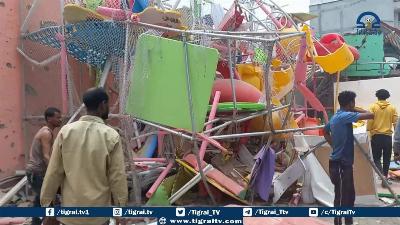 An Ethiopian government airstrike ripped through a kindergarten in the northern Tigray region on Friday, killing at least seven people including several children, medics said, as the hunger-stricken region plunged into a new round of fighting.

The attack came two days after fighting erupted on the southeastern border of Tigray, shattering a five-month truce between the government and rebels intended to allow supplies into a region that has been under a punishing government-imposed siege for most of the past year.

Dire food shortages have left nearly half of Tigrayâs six million people on the verge of starvation, according to the United Nations, and supplies of medicine, fuel and cash are disastrously low.

Fears that the latest fighting, which each side accused the other of starting, would quickly spread across Tigray grew on Friday after the airstrike demolished a kindergarten in the regional capital, Mekelle, just after midday.

Footage broadcast on a local TV station showed rescuers picking through the rainbow-colored remains of the kindergarten, searching for survivors. In one clip, the body of a small boy with a gaping chest wound was loaded into the back of a truck. Ambulances rushed to the cityâs main hospital, Ayder Referral.

It was unclear if the kindergarten was open when the bomb struck; by some accounts, those hit by the blast were in a playground outside the building.

Dr. Fasika Amdeslasie, a surgeon who treated the wounded, said that four bodies had been brought to Ayder, and three others to the smaller Mekelle Hospital. âThe jet came, we heard a blast, and then the victims started pouring in,â he said.

The local Tigray television station also reported seven dead. The head of the Ayder hospital, Kibrom Gebreselassie, said in a tweet that his hospital had received four dead and nine wounded.

Dr. Fasika supplied photos from the emergency ward that included the boy with the chest wound, who he said was 10 years old. He identified the kindergarten as the RES Kids Paradise, a place he knew because his own children once attended it, he said.

In a statement released soon after the blast, the Ethiopian government vowed to âtake actionâ against the Tigray rebels and urged civilians to stay away from military sites.

As graphic images of wounded children circulated on social media, the government issued a second statement to news agencies denying it had struck a residential neighborhood. Its Air Force was âtargeting only military sites,â it said, accusing the Tigray Peopleâs Liberation Front, which controls much of Tigray, of âdumping fake body bags in civilian areas.â

The escalating violence is a major blow to international efforts to mediate the conflict, which erupted in November 2020 when Prime Minister Abiy Ahmed ordered a military operation in Tigray.

Since then, the conflict has been accompanied by accounts of widespread atrocities and civilian suffering, especially in Tigray, where millions have little to eat. The situation could get even worse in the coming weeks, with predictions from the United Nations weather agency on Friday that a devastating drought is about to stretch into a fifth consecutive failed rainy season.

In Tigray, a very public dispute in recent days between the rebels and the United Nations has added to the sense of crisis.

On Thursday the head of the U.N.âs World Food Program, David Beasley, accused the rebels of stealing 570,000 liters of fuel from its compound in Mekelle that, he said, was needed to distribute relief aid. âMillions will starve if we do not have fuel to deliver food,â Mr. Beasley wrote in a tweet. âThis is OUTRAGEOUS and DISGRACEFUL. We demand return of this fuel NOW.â

The Tigrayan authorities shot back with a statement that they had loaned 600,000 liters of fuel to the World Food Program earlier this year, and had seized what was owed to them. âThe government of Tigray has not âstolenâ any fuel tankers,â it said in response to Mr. Beasley. âHis regrettably unfortunate choice of words has far-reaching ramifications for humanitarian operations across Tigray.â

William Davison, an analyst with the International Crisis Group, said that regardless of whether fuel was owed or not, the dispute had jeopardized critical relief supplies. He called on all sides to âprioritize desperately needed assistance to civilians rather than their military and political goals.â

As the war ramped up again in Tigray, ending five months of uneasy calm, such appeals appeared to be falling on deaf ears.

Analysts believe that any escalation of fighting will be concentrated in western Tigray, which pro-government militias seized in the early weeks of the war in 2020. The Tigrayans say they want that territory returned to them as a precondition for any talks.

Western allies are pressuring the belligerents to pull back, hoping to create enough space for the African Union mediator, the former Nigerian president Olusegun Obasanjo, to bring both sides to the table. Senator Jim Risch of Idaho, the senior Republican on the Foreign Relations Committee, said that American engagement âmust include legislative options,â a reference to possible additional sanctions.

But some analysts said that calls for a return to talks only highlighted the abject failure of Mr. Obasanjoâs faltering peace effort. âThat process is now dead,â Alex de Waal, executive director of the World Peace Foundation at the Fletcher School of Law and Diplomacy at Tufts University, wrote in an article on Friday. âAppeals for restraint will fall on deaf ears.â

In Mekelle, the resumption of hostilities was met with a shrug by a population that has already been numbed by almost two years of conflict, including a crippling siege.

âWe have already touched the bottom of the pit,â Dr. Fasika said. Even when the now-collapsed truce was in operation, he said, the Ayder hospital only received âa trickleâ of lifesaving medicines.

âThe hospital is barely functional,â he said. âWe see patients dying in our hands because of a lack of IV fluids, a lack of antibiotics, a lack of oxygen, and a lack of lights because we have no petrol for the generator.â