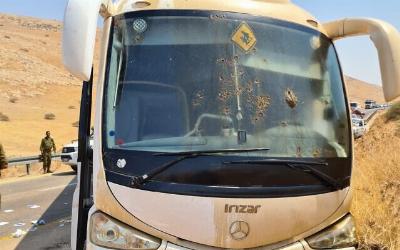 The scene of a shooting attack on an Israeli bus in the Jordan Valley, on September 4, 2022. (Photo courtesy Israeli Bus Drivers Union)

Shots were fired at a bus carrying Israeli soldiers on a major highway in the Jordan Valley on Sunday, injuring seven people, the military and medics said.

The Israel Defense Forces said Palestinian gunmen opened fire at the bus near the settlement of Hamra, seriously wounding one soldier. Another five soldiers and the busâs civilian driver were hurt. The attack came amid rising violence in the West Bank.

The seriously wounded soldier and the bus driver, listed in moderate condition, were taken by helicopter to Rambam Hospital in Haifa, with gunshot injuries. The hospital later said the soldierâs condition had improved.

The other five soldiers were lightly hurt by glass fragments.

âFrom an initial review of the incident, the attack was committed by a cell driving a pickup truck, which overtook the bus and opened fire, and attempted to set it on fire,â said Col. Meir Biderman, the commander of the 417th territorial brigade.

âThe soldiers on the bus returned fire, which made the terrorists flee,â he said.

Two suspected gunmen were arrested shortly after by Israeli soldiers and police officers, the IDF and Israel Police said. Several firearms were found at the scene. The pair were taken to be questioned by the Shin Bet security agency.

The gunmenâs getaway vehicle caught fire during their escape, possibly from flammable liquid they attempted to pour on the bus amid the attack. Both were seen hurt in images circulated online.

The pair were named by Palestinian media as Muhammed and Walid Turkman, apparent relatives, residents of the Jenin area in the northern West Bank.

A third suspect apparently fled, according to Hebrew-language media reports. Biderman, said IDF forces were continuing to hunt for additional members of the cell.âWe wonât rest until we catch all of them,â he said.

Defense Minister Benny Gantz hailed troops for arresting the pair of suspects after the attack. âThe security forces immediately launched a manhunt and captured the attack suspects in a quick and professional operation,â he said on Twitter.

âWe will continue to increase our focused operations against terror in the Judea and Samaria area,â he added, using the biblical name for the West Bank.

Gantz wished a speedy recovery to the wounded victims.

Prime Minister Yair Lapid also wished a swift recovery to the soldiers and bus driver hurt in the shooting attack, while praising first responders and troops for treating the wounded and quickly tracking down the suspects.

âWe will continue to reach anyone who tries to harm the citizens and soldiers of the State of Israel,â Lapid said in a statement.

Last month, shots were fired at an Israeli bus traveling along Route 60, the West Bankâs main north-south highway, near the Ofra settlement. The bus was full at the time of the attack and at least eight bullet holes were found on the busâs windows and body, but no injuries were caused.

The past week alone has seen a number of attacks, as Palestinian gunmen fired at several military posts across the West Bank, and a soldier was stabbed near Hebron. There have also been numerous stone-throwing attacks on Israeli civilians driving in the West Bank.