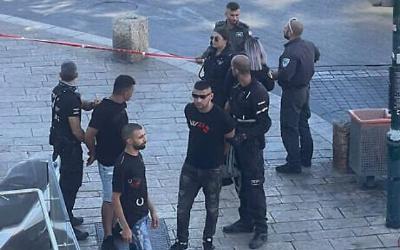 A Palestinian man carrying a makeshift firearm and two bombs was arrested by officers in Jaffa on Thursday, and later admitted he sought to commit a major terror attack in Tel Aviv, police said.

According to police, the 19-year-old resident of Nablus, with no permit to enter Israel, aroused the suspicion of officers of the elite police reconnaissance unit Yasam near Jaffaâs clock tower, a major landmark and tourist attraction.

He was detained and found to be carrying a âCarloâ submachine gun and two pipe bombs filled with nails. Police said he had been taken for further questioning by the Shin Bet security agency.

In his initial questioning by officers, the suspect admitted he was on the way to carry out an attack in Tel Aviv, and said he was looking for a crowded place, according to police.

âHe was looking to commit a massacre,â Shabtai told reporters at the scene.

Shabtai thanked the Yasam officers who âprevented a large-scale deadly terror attackâ by noticing the suspect and questioning him.

Sharif Hasson, one of the cops involved in the arrest, said the man had âno chance to resist arrest.â

âWe were in Jaffa, we identified a suspicious person, stopped him and while we were checking him he admitted that he was in Israel illegally, didnât have any papers or ID,â he told gathered media.

âHe had a bag, and there was something metal poking out. The bag was heavy, really heavy. While checking the bag we saw it was a gun. We told the guy to get on the floor, that he was under arrest,â Hasson added.

Images released by the police showed what appeared to be a makeshift gun the man was armed with, rather than a Kalashnikov, as police originally reported.

The suspect had previously been arrested in April after attempting to bring a knife onto the Temple Mount in Jerusalem. He was tried and sentenced to four months in prison.

Police said officers detained other suspects nearby. According to Channel 12 news, one was thought to have dropped off the suspect in the area.

The Israel Defense Forces set up checkpoints in the West Bank near the settlement of Ariel amid a search for additional suspects who may have been involved in the planned attack. According to the Kan public broadcaster, a relative of the suspect was arrested in the area.

âThe State of Israel will act forcefully and without compromise against those who try to harm us. I commend the security forces for apprehending the terrorists in Tel Aviv-Yafo and preventing a significant terrorist attack,â he said in a statement released by his office.

âThe entire State of Israel thanks you for your bravery. You saved many human lives. I donât want to think about what would have happened if you werenât in the area,â Lapid said in remarks provided by his office.

The Prime Ministerâs Office said Lapid would award the pair with commendations for excellence.

According to the PMO, Lapid met earlier Thursday with defense and military brass at the IDF headquarters to discuss rising violence in the West Bank. Police and internal security officials did not attend.

âThe goal of the meeting was to look into tools which can immediately stabilize the situation in the [West Bank] and stop it from snowballing,â the PMO said.

Defense Minister Benny Gantz said Israel will step up anti-terror raids in the West Bank and elsewhere, without specifically tying the effort to the thwarted attack.

âWe will deploy more forces and more measures, bolster cooperation among defense agencies, speed up building the [West Bank] seam-line barrier,â he said at a ceremony for outstanding officers.

âJust in the past week we prevented a number of attempts to harm Israelisâ emanating from the West Bank, he said. âWhere ever terror is not being dealt with, we will deal with it.â

IDF troops have repeatedly come under gunfire during nightly raids in the West Bank, in a monthslong effort to thwart Palestinian terrorists.

The military launched the operation, dubbed Breakwater, after a series of deadly attacks that killed 19 people between mid-March and the beginning of May. More than 1,500 suspects have been detained since the start of the operation.

At least 91 Palestinians have been killed by Israeli forces so far this year, according to a tally from the Palestinian Authority health ministry.

The list included Palestinians who carried out attacks inside Israel, as well as a veteran journalist â Al Jazeeraâs Shireen Abu Akleh, who held US citizenship and whose death was deemed an accident by the IDF on Monday â and teens who violently protested in response to Israelâs nightly military operations in their neighborhoods.