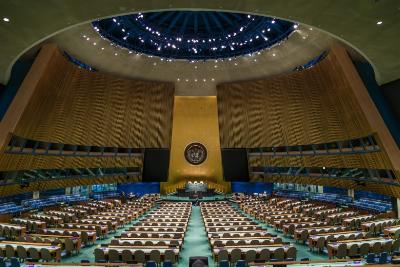 The United Nations General Assembly (File photo)
"A total of 34 countries openly boycotted Wednesdayâs conference at the UN marking the 20th anniversary of the World Conference Against Racism in Durban because of the antisemitism and anti-Israel bias at the 2001 event.

More than twice as many countries opted out of the event than the previous Durban Review Conference in 2011, when 14 did so.

The Israeli Foreign Ministry thanked the countries for their support.

'The original Durban Conference, an UN-hosted event, became the worst international manifestation of antisemitism since WWII,' the Foreign Ministry stated. 'Inflammatory speeches, discriminatory texts, and a pro-Hitler march that took place outside the halls were only part of the ugliness displayed in 2001. The âWorld Conference on Racismâ actually ended up encouraging it, including through the parallel NGO forum, which displayed caricatures of Jews with hooked noses and fangs dripping with blood, clutching money.'

The Foreign Ministry said that the organizations seeking to demonize and boycott Israel 20 years ago continue their campaign, but have failed.

'Israel is a thriving state that is increasing its cooperation with countries in the region and will continue to do so,' it said.

Ambassador to the UN Gilad Erdan, who has worked for the past year to bring more countries on board against Durban, pointed out that few heads of state addressed the conference, like those of South Africa and Cuba, and only a handful â like Iran and the Palestinian Authority â sent foreign ministers to the event, in addition to more countries boycotting it than ever before.

'This is an achievement for Israel proving that an understanding has permeated that the Durban Conference was an event plagued with hatred and antisemitism, and that the decision made [at the conference] does not contribute to the fight against racism,' Erdan stated. 'Rather, the opposite is true, and therefore, countries are avoiding it.'

The 2001 Durban Conference was a hotbed of antisemitism, with accredited groups at its NGO forum distributing copies of the antisemitic canard The Protocols of the Elders of Zion together with cartoons of hook-nosed Jews, and thousands marching against Israel, calling it an apartheid state. Thousands protested against Israel, with signs equating the Star of David to a swastika and praising Hitler.

During the 2009 and 2011 Durban Review Conferences, then-president of Iran Mahmoud Ahmadinejad denied the Holocaust, calling it a pretext for Israeli oppression of Palestinians.

Durban IVâs theme was 'Reparations, racial justice and equality for people of African descent,' and included the adoption of the original Durban Declaration, in which the Israel-Palestinian conflict is the only one specifically mentioned.

The attendees voted in favor of a statement that noted an increase in 'racist violence, threats to violence, discrimination and stigmatization' against Asians in light of the COVID-19 pandemic, but does not mention the increase in pandemic-related antisemitism and distortion of the Holocaust.

Palestinian Authority Foreign Minister Riyad al-Maliki said the Palestinians suffer from 'one of the most pervasive forms of colonialism and apartheid colonialism. In the face of such injustice, I affirm our individual and collective rights to equality, freedom and dignity. The future must be free of the shackles of evil, painful legacies that have defined millions around the world.'

The PA minister compared the Palestiniansâ situation to that of black South Africans under apartheid, declaring: 'Our people will persevere. We will not relent. We owe it to our people to fight for a reality free of racism.'

Maliki called the 2001 Durban Declaration a 'clarion call of anti-racism,' and lamented that the fight against 'colonialism, racism and apartheid is marred by the unwarranted attack on the Durban Conference. We reject the decisions of some states to boycott the conference in light of its noble intentions.'

Syrian Deputy Foreign Minister Faisal Mekdad accused Israel of the 'ongoing pursuit of racist policies targeting Syrians' in the 'occupied Golan Heights,' and falsely asserted that Israel denies them the right to education, employment and property.

In addition, Mekdad said of Israelâs treatment of the Palestinians that 'Israel is last place in the world where such racist policies have been implemented after the end of apartheid in South Africa.'

Under the banner: 'Fight Racism, Not Jews: The UN and the Durban Deceit,' Israeli Ambassador to the United States and the United Nations Gilad Erdan, former US secretary of state Mike Pompeo, former US attorney-general Michael Mukasey, Oscar-winning actor Jon Voight and others spoke at a conference on Sunday organized by Touro College, Human Rights Voices and CAMERA, in a powerful head-on plea to countries to pull out of the Durban IV conference and to stand up to todayâs antisemitism.

'All countries that are genuinely committed to combating racism should refuse to attend Durban IV and the 20th-anniversary carnival,' said Anne Bayefsky, director of Touro Institute on Human Rights and the Holocaust, president of Human Rights Voices, and moderator of the conference. 'Thatâs why we held a counter-conference entitled âFight Racism, Not Jews.â The Durban deceit, the double-talk, the double-standards â and, in particular, the discrimination â need to be exposed and rejected, period.'â
Date
September 22, 2021
Title
34 countries boycott Durban IV Conference, The Jerusalem Post
Author(s)
Lahav Harkov
Original Source
https://www.jpost.com/international/31-countries-to-boycott-anti-israel-durban-iv-conference-today-fm-679966
Attachment
Click here to view this article in MS Word/PDF format