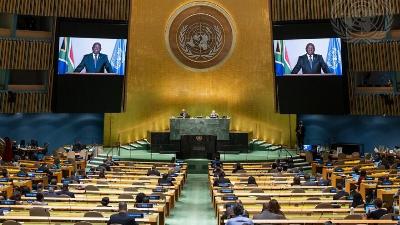 U.N. General Assembly commemoration of the 20th anniversary of adoption of Durban Declaration and Programme of Action, Sept. 22, 2021
" A number of American Jewish organizations slammed a resolution adopted on Wednesday at a high-level meeting at the U.N. General Assembly that commemorated the 20th anniversary of the Durban Declaration and Programme of Action (DDPA) stemming from a notoriously anti-Semitic World Conference Against Racism in Durban, South Africa, in 2001.

The original Durban declaration was censured by Jewish groups and nations such as the United States for allowing the presence of overt anti-Semitic and anti-Israel hate, as well as including Palestinians as the only group named as victims of racism.

Bânai Bârith wrote that it has worked over the past few weeks in partnership with the Jewish Broadcasting Service on Durban, anti-Zionism and anti-Semitism. The organization featured luminaries such as Soviet dissident Natan Sharansky, intellectual Bernard-Henri LÃ©vi, former U.S. National Security Advisor John Bolton and others, culminating in an hour-long interview with Bânai Bârith honorary president Richard Heideman, who led the Jewish delegation at the Durban conference and his wife, Phyllis Heideman, president of the International March of the Living.

In the past year, Bânai Bârith also lobbied other nations to join the United States and Israel in boycotting the anniversary conference, also known as Durban IV, leading to a total of 35 countries that declined to participate in the commemoration.

âThis public disassociation by a substantial moral minority at the U.N. represents a meaningful victory against efforts to hijack the world body and the critical fight against racismâspecifically, racism against people of African descentâfor the purposes of delegitimizing Israel by obscenely equating only it and Jewsâ national liberation movement, Zionism, with racism,â Bânai Bârith wrote in the statement.

AIPAC also strongly condemned Durban IV on its Twitter account, while individually tweeting appreciation for countries that joined the boycott.

'The UN #DurbanIV conference is a cesspool of discriminatory, anti-Israel propaganda,' AIPAC tweeted on Tuesday. 'âZionism=Racismâ is a vicious slander against the Jewish state and its supporters. America and many allies stand proudly with Israel in boycotting this despicable conference.' Alex Safian, associate director at CAMERA, which monitors bias in reporting on Israel and the Middle East, noted that there was no improvement in Durban IV and the passed resolution than in the previous three conferences.

'The original Durban Conference in 2001 created the firestorm of renewed and growing anti-Semitism and anti-Zionism, and the statements yesterday from Rep. Rashida Tlaib (D-Mich.) and her radical colleagues are just an example of this in our own Congress,' he said in an email.

'The United Nations was founded as a reaction to Nazism and the Holocaust, but the Durban process proves that fascists and bigots are still much more comfortable in the U.N. than Jews.'

Anti-Israel members of the Democratic Party also motivated Zionist Organization of America national president Mort Klein to make a few phone calls to U.N. offices he had connections with to urge them not to attend Durban IV. His organization put out a news release lauding nations that announced they would not participate, though after that acknowledged following the proceedings only a little bit.

Klein said during one of his calls, one official him that 'anti-Semites' in Congress had inspired a number of countries that were thinking of not participating in Durban IV to join.

'This one guy told me, you should know that inadvertently or directly, theyâve had an impact on several countries that participated, figuring they have to cover it because there are a dozen anti-Semites in Congress,' said Klein, adding that the official also told him that he believed Jew-hatred will continue to grow in the United Nations."
Date
September 24, 2021
Title
âA cesspool of anti-Israel propaganda:â Jewish groups blast new resolution put forth at Durban IV, JNS.org
Author(s)
Dmitry Shapiro
Original Source
https://www.jns.org/a-cesspool-of-anti-israel-propaganda-jewish-groups-blast-new-un-commemoration-resolution-put-forth-at-durban-iv/
Attachment
Click here to view this article in MS Word/PDF format