After delays, will U.N. update its blacklist of companies tied to Israeli settlements? 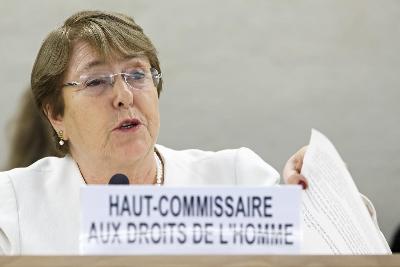 However, questions have emerged as to whether or not the United Nations will go forward with an update after previous delays, coupled with strong pushback from the Israeli government, including a boycott of the OHCHR.

Much like the recently announced new probe by the U.N. Human Rights Council, the 2020 blacklist was unprecedented in any disputed territory around the world. While carrying no force of law, and with no accompanying accusations that those listed companies were actually breaking any law, the blacklist was expressly created with the intent to establish a boycott movement against those private businesses and pressure them into stop doing business in Jewish communities â even those under full Israeli control according to international agreements.

'The High Commissioner [Michelle Bachelet] will say privately that she inherited this problem, but we think she had the ability to postpone the release of the blacklist. She knows it doesnât serve any kind of positive purpose,' former Israel Ambassador to the United Nations Danny Danon told JNS. Danon was involved in discussions over the blacklist during his time in New York...

At the time of the 2020 blacklistâs publication, the Israeli Foreign Ministry said it was cutting off ties with the OHCHR and Bachelet.

But the government went further and is still boycotting the boycotters. It was made public in October 2020 that Israel refused to renew the visas of international staff from the OHCHR, with only Israeli and Palestinian staff left to keep the officeâs operations going in person. On the eve of the two-year anniversary of the blacklist, the Israeli government and the OHCHR told JNS that nothing had changed...

An Israeli government source told JNS that none of the foreign members of the record 24 full-time staff expected to be hired for the current Commission of Inquiry should expect to receive a visa to conduct its work either. The commissionâs findings could potentially be used by organs like the International Criminal Court to bring charges against current and former Israeli government officials and military leaders..."
Date
January 6, 2022
Title
After delays, will U.N. update its blacklist of companies tied to Israeli settlements?, JNS.org
Author(s)
Mike Wagenheim
Original Source
https://www.jns.org/after-delays-will-un-update-its-blacklist-of-companies-tied-to-israeli-settlements/
Attachment
Click here to view this article in MS Word/PDF format