Antisemitic Attacks in New York Are at Highest Level in Decades 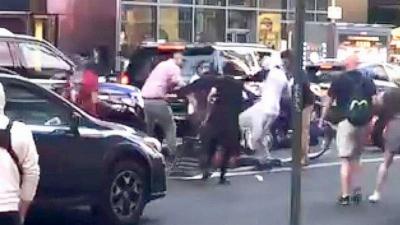 A group of people assaulting a Jewish man in New York's Times Square, May 20, 2021 (Photo courtesy Twitter)
"Orthodox Jews assaulted on busy streets in Midtown Manhattan and in quiet neighborhoods in Brooklyn. Swastikas drawn on a Long Island home and spray painted onto Wall Streetâs Charging Bull statue. A bomb threat against a Jewish community center in Albany, and fliers in Dutchess County that warned residents, 'Jews want to take your guns.'

The number of antisemitic incidents in New York increased by 24 percent last year to the highest level in decades, including a surge in the number of assaults, as well as both criminal and noncriminal incidents targeting Jews, according to an annual report released on Tuesday by the Anti-Defamation League.

The group said it counted 416 antisemitic incidents across the state, including 51 assaults, the most physical attacks it has recorded since it began compiling such data in 1979. The report was based on information collected from local law enforcement agencies and Jewish community leaders and individuals.

The surge was part of a nationwide trend that saw 2,717 antisemitic incidents across the United States, including 88 assaults, an increase of 167 percent from the year before. That violence came after a yearslong string of antisemitic killings, including in Pittsburgh; Poway, Calif.; and Jersey City that have left the Jewish community on edge.

'This is the largest total we have ever seen,' said Jonathan Greenblatt, the chief executive of the Anti-Defamation League. 'We had Jews beaten and brutalized in broad daylight in Midtown Manhattan, in Brooklyn, in the Diamond District. What was remarkable about it was people acted with impunity. These were Jewish people wearing a kipa or who were visibly Orthodox being assaulted for being Jews, and that is brand-new.'...â
Date
April 26, 2022
Title
Antisemitic Attacks in New York Are at Highest Level in Decades, The New York Times
Author(s)
Liam Stack
Original Source
https://www.nytimes.com/2022/04/26/nyregion/antisemitic-attacks-new-york.html
Attachment
Click here to view this article in MS Word/PDF format