Assessing the twin disasters of September 2001 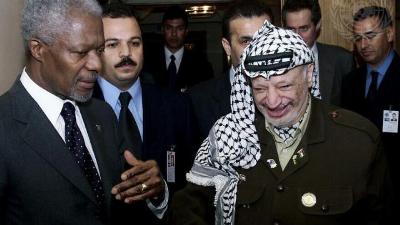 U.N. Secretary-General Kofi Annan with Yasser Arafat at the 2001 Durban Conference (File photo)
"We have a tendency to forget that two historical events occurred in early September 2001. No one needs to be reminded of the jihadist attacks on Sept. 11 that killed nearly 3,000 people in a single morning. The other event, that tends to be overlooked, was the United Nations Conference Against Racism, Racial Discrimination, Xenophobia, and Related Intolerance in Durban, South Africa, which concluded four days before the attacks.

With 20 years of hindsight, and in light of Americaâs catastrophic withdrawal from Afghanistan last month, it suddenly seems clear that the Durban Conference changed the course of history as much if not more than the Islamic terrorist attacks on New York and Washington. It was the legacy of Durban, more than Sept. 11, that brought the free world to its present perilous juncture.

Today, a humiliated free world faces triumphant forces of jihad, far more powerful than they were on Sept. 10, 2001. It faces a rapidly rising China. Above all else, it faces internal upheavals and cleavages within its own ranks.

U.S. President Joe Biden justifies his decision to withdraw U.S. and NATO forces from Afghanistan in the shameful way he did by claiming that the time had come to end the 'forever war.' But Biden and his advisers donât have a problem with all âforever wars.â They just werenât willing to fight jihadist Islam. They didnât want to fight this specific warâagainst the enemy that attacked America 20 years ago last week. And in their frenzied quest to devote all of their energies and efforts to fighting their chosen forever war, Biden and his team were willing to ignoreâor perhaps worse, to acceptâtwo very simple facts of war.

Several analysts have likened the U.S. defeat in Afghanistan to the fall of the Byzantine capital Constantinople to the Ottoman armies in 1453. The Taliban flag flying over what was the U.S. Embassy in Kabul until the end of last month, and reports that China is considering taking over Bagram Air Base, signal that Americaâs enemies believe they are ascendant, that the free world has been defeated.

The 'forever war' Biden, his advisers and supporters are gunning to aggressively pursue until the complete destruction of their enemy is a war within the United States. The 'enemy' is their political rivals, who they castigate as 'racists.' They call their forever war 'the war against racism.'

The odd thing about their efforts is that the American war against racism was won decisively more than 50 years ago thanks to the Civil Rights Movement. The majority of Americans recognized at the time and since that racism is antithetical to the ideals of freedom and equal opportunity on which the United States was founded.

The seeds of this strange war were planted 20 years ago at Durban. We remember the Durban conference mainly for its anti-Semitic agenda. The plan to present anti-Zionism as a 'kosher' form of anti-Semitism, and use it to abrogate the Jewish stateâs right to exist was codified at Durban. But legitimizing anti-Semitism wasnât only a means to hurt the Jews. For many actors on the international left, legitimizing the goal of canceling Israelâs moral and legal right to exist was, and remains today, a means to advance their primary goal: destroying Americaâs moral confidence in its role as the leader of the free world and denying the United Statesâ moral right to fight to defend its national interests.

As author Lee Smith explained recently in Tablet online magazine, the point of presenting the Palestinian terrorists as victims and Jewish Israelis as war criminals while the opposite is true was to undermine Americaâs faithâand the faith of the West more generallyâin its own morality.

'To truly unmask the Western liberal bourgeoisie as sentimental hypocrites whose time has passed,' Smith explained, 'it was necessary to strike at those they swore never again to forsake, whose culture and religion helped birth the conceptual and spiritual universe of the Westâi.e., the Jews.'

A political war directed against the United States specifically was launched at Durban in parallel to the anti-Semitic onslaught. Its foundational assumption was that the United States was born in the sin of racism with black African slavery and that nothing can ever expiate the sin. Racism, not liberty, was declared to be Americaâs true foundation. The Civil War, in which half a million Americans died to free the slaves, didnât change a thing. Neither did the Civil Rights Movement, which ended institutional and legal discrimination against blacks and other minorities.

It wasnât the governments of Africa, or Iran or Russia or China that spearheaded the war against America at Durban. It was launched by American citizens. Led by Rev. Jesse Jackson, hundreds of black American radicals descended on Durban. They were joined by hundreds of activists from leftist extremist groups.

They castigated the United States as the most repressive state in the world, whose victims are the wretched of the earth. Blacks, all other minorities (except Jews), women, homosexuals, transgendered; everyone was on the list of Americaâs victims. They called on the United Nations to send inspectors to monitor 'racist' U.S. police and the criminal justice system more generally. They demanded trillions in âreparationsâ for slavery to be paid to black Americans born 100 years after all slaves were freed.

When the Bush administration walked out of the Durban conference in the middle, then-Secretary of State Colin Powell and his advisers dismissed the importance of the events by castigating the activists at the conference as radical fringe elements bereft of any significant constituency back home. Their dismissiveness certainly seemed reasonable four days later.

But as it turned out, even before the dust had settled on the ruins of the World Trade Center and the Pentagon, the 'radical fringe' began throwing its weight around. And that weight was considerable. Indeed within a few short years, its influence had become decisive.

The United States lost its way in both Iraq and Afghanistan in large part because George W. Bush and his advisers couldnât contend with the withering and continuous condemnation of them and their military operations by the American left in the media, academia, Congress and beyond. The left worked without interruption to demonize Bush and to undermine and delegitimize all of the Bush administrationâs military efforts against the forces of radical Islam.

Bushâs decision to transform the war on terror into campaigns for democracy was born at least in part from his distress. Bush and his advisers hoped to end or at least diminish the unending assaults on them and on U.S. military operations by transforming the war from a means to defend America and its interests into something altogether altruistic.

The 'fringe' activists who opened the war against America at Durban in 2001 seized the reins of government in 2008 when Jesse Jacksonâs disciple Barack Obama won the presidency. Today, the same political organizers and their successors control the Democrat Party and Biden, who won the Democratic presidential nomination and the White House with their support.

By rights, the Americans were supposed to respond to Sept. 11 with an unrelenting war to victory against the forces of jihadist terror and the regimes that supported them. But undermined from the outset by the war their countrymen declared against them at Durban, two decades on, the Taliban has won and America is led by men and women who think that the American radicals at Durban had justice on their side.

This is not the end of the story. The incandescent anger of most Americans, including a large percentage of Democrats, express towards Biden and his team for their humiliating and strategically disastrous failure in Afghanistan is a source of hope that the minority fringe at Durban will return to its rightful place at the margins of American society. That America will go back to being the land of the free and the home of the brave. But for now, as we gaze back 20 years, it was Durbanânot Sept. 11âthat changed the course of America and through it, the course of history."
Date
September 12, 2021
Title
Assessing the twin disasters of September 2001, JNS.org
Author(s)
Caroline Glick
Original Source
https://www.jns.org/opinion/assessing-the-twin-disasters-of-september-2001/
Attachment
Click here to view this article in MS Word/PDF format