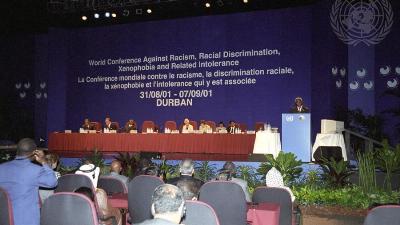 U.N. Secretary-General Kofi Annan speaking at the 2001 Durban Conference (File photo)
"In early September 2001, the great and the good of the worldâs human rights community gathered in Durban, South Africa for a conference called to eliminate racism and discrimination. They met just a few days after an inhuman atrocity in Jerusalem which killed and maimed Israelis in a pizzeria filled with teenagers and young families. But the Durban participants made no mention of Palestinian bombings or of the victims; for the self-proclaimed leaders of international morality, Israelis do not have human rights. Instead, participants from the UN and powerful non-governmental organizations (NGOs) focused on demonizing Israel and Zionism.

Durban was the blueprint for the 21st century antisemitism. Caricatures of Jews with fangs dripping blood were distributed by the Arab Lawyers Union, and delegates picked up copies of the Protocols of the Elders of Zion forgery. Hate literature and speeches denouncing Israeli 'apartheid' were accompanied by well-organized mass marches through the streets, with placards declaring 'Zionism is racism.'

The late Tom Lantos, a member of Congress from California, Holocaust survivor, and part of the US delegation referred to Durban as 'the most sickening display of hate for Jews I have seen since the Nazi period.' Prof Irwin Colter, from the Canadian delegation, later declared, 'If 9/11 was the Kristallnacht of terror, then Durban was the Mein Kampf.' Adding to the virulent atmosphere, Yasir Arafat and Palestinian propagandist Hanan Ashwari were flown in to denounce Israeli 'apartheid.'

To their credit, the official American and Israeli delegations walked out of the diplomatic forum, and the Europeans, Canada and others negotiated a softer version of the final text.

But the UN officials, led by Human Rights High Commissioner Mary Robinson, and her powerful NGO allies, raised no objections â on the contrary, they were active participants in the hatefest. In the workshops and main plenary with 5000 participants, the few NGO delegates who were not part of the anti-Israel network were silenced.

The UN and NGO leaders were not caught by surprise â far from it. The plan to hijack this was hatched months before, at a UN preparatory conference in Tehran. There, the strategy of equating Israel to apartheid South Africa was developed into a full-scale war plan.

At Durban, the NGO Final Declaration and Program of Action, composed in Tehran, was a battle plan for political war. Israel was labeled as a 'racist apartheid state', guilty of 'genocide,' and 'racist crimes against Palestinians.' All countries were called upon to implement policies for 'the complete isolation of Israel as an apartheid state.' After this hate document was adopted, the participants celebrated.

The Durban process, from before Tehran until the final declaration, was largely directed by powerful NGOs â particularly Human Rights Watch (HRW), and its Palestinian partners. Before the opening sessions, HRW Executive Director, who has a long record of hostility towards Israel, told an interviewer, 'Clearly Israeli racist practices are an appropriate topic.' During the NGO Forum, Reed Brody, who headed the HRW delegation, joined in blocking the participation of Jewish delegates, as noted by Lantos, Professor Anne Bayefsky, and others. Other participants recalled that HRWâs 'silence was quite distressing.'

After HRW founder Bob Bernstein and donors voiced criticism, HRW claimed to have condemned the final resolution. Their version was repeated in an April 2021 New York Times article touting the latest HRW 'apartheid' campaign, and quoting Brody supposedly telling the Forum that it is 'wrong to equate Zionism with racism.' All of the evidence suggests otherwise.

Indeed, immediately after Durban, the same NGOs and UN allies moved to implement the strategy.

HRW led the other groups with allegations of war crimes following every Israeli response to terror, whether from Hamas in Gaza or Hezbollah from Lebanon. In 2021, HRW has continued to publish a flood of âreportsâ and pushing demonization further with each step. They even invented and promoted a unique definition of apartheid to lobby the International Criminal Court to open investigations against Israelis. In parallel, the HRW and the NGO network promote boycotts targeting Israeli universities and businesses, athletes and cultural events, often joined by church groups with classical theological antisemitic agendas under the banner of BDS (boycotts, divestment and sanctions).

The constant drumbeat from Durban has contributed significantly to violent antisemitic attacks worldwide. Recent statistics from the US, Britain, and European countries highlight the hate directed against Jews and Jewish or Israeli targets.

Nevertheless, the Durban framework remains on the UNâs permanent agenda. On September 22, the General Assembly will host Durban 4 â a one day low-profile event in which officials and affiliated NGOs will 'celebrate' the successes. To their credit, President Biden and the leaders of Canada, Britain, and a number of European officials announced that their governments will not participate.

But the echoes of the original anti-racist hatefest continue, with the ongoing antisemitism and obsessive Israel-bashing under the faÃ§ade of human rights. Now, as in 2001, many of those who claim to speak in the name of morality and law continue to support the perpetrators of inhuman brutality, and erase the victims of terror and injustice. This is the legacy of Durban after 20 years."
Date
September 9, 2021
Title
âCelebratingâ 20 Years Since the U.N. Durban Hatefest, The Jewish Journal
Author(s)
Gerald Steinberg
Original Source
https://jewishjournal.com/commentary/opinion/340380/celebrating-20-years-since-the-un-durban-hatefest/
Attachment
Click here to view this article in MS Word/PDF format