Congress members call for defunding of U.N. Commission of Inquiry into Israel 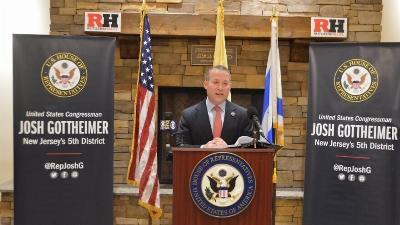 Rep. Josh Gottheimer (D-N.J.) addresses students at Rutgers University Hillel on Dec. 13, 2021. (Photo credit: Courtesy)
"A bipartisan group of legislators in the House of Representatives is calling for the United States to defund the U.N. Committee of Inquiry (COI) on Israel.

Led by Reps. Josh Gottheimer (D-N.J.) and Vicky Hartzler (R-Mo.), the 42 members sent a letter to U.S. Secretary of State Antony Blinken, according to a news release on Tuesday, calling the COI, which was recently approved in the United Nations, âoutrageous and unjust.â

âWe urge the U.S. to lead an effort to end the outrageous and unjust permanent Commission of Inquiry (COI) on the Israeli-Palestinian conflict, which was created by the UNHRC in May 2021,â the members wrote in the letter. âThis commission will not only focus on the actions Israel took in Gaza as it sought to defend its citizens from unprovoked rocket attacks. It will also have a carte blanche mandateâin perpetuityâto investigate any allegations against Israel in the past or in the future; whether in the West Bank or Gaza or in all of Jerusalem and even within the recognized pre-1967 borders of the State of Israel.â

The letter recalled the administrationâs stance against the COI when it controversially announced last year that the United States will return to the U.N. Human Rights Council (UNHRC), despite having withdrawn from it under former President Donald Trump, with Blinken stating that the United States will oppose actions that unfairly target Israel.

âCOIâs mandate is designed to accelerate the political, economic, and legal challenges to Israel and undermine its legitimacy by pressuring international legal institutions to take action against Israeli leaders,â the members wrote. âShockingly, the COI resolution makes no mention of the terror group Hamasâwhich initiated the conflict by launching missile attacks on Israelâand does not include any mention of Israelâs right to defend itself.â

With the coronavirus pandemic causing scarce resources and an already slim budget, the world body does not have the funding for the COI investigation, according to the letter.

It also stated that the number of organizations unfairly targeting Israel should be zero, and there was no need to add another. The legislators pointed to nations around the world that violate human rights, including those investigating Israel, but none have a permanent agenda item at the UNHCR."
Date
January 25, 2022
Title
Congress members call for defunding of U.N. Commission of Inquiry into Israel, JNS.org
Original Source
https://www.jns.org/congress-members-call-for-defunding-of-un-commission-of-inquiry-into-israel/
Attachment
Click here to view this article in MS Word/PDF format