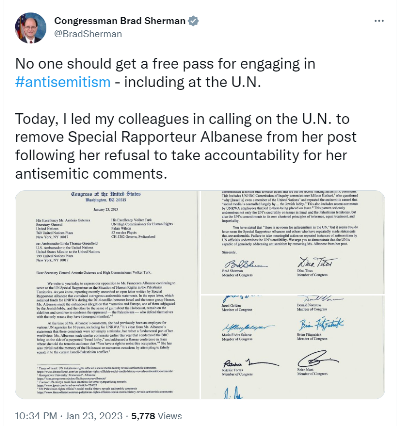 Tweet by Congressman Brad Sherman (Screenshot)
"US Congress members on Monday called for the removal of a UN Palestinian rights official over antisemitic comments exposed by The Times of Israel.

UN Special Rapporteur Francesca Albanese, who is tasked with investigating Israeli activities in the Palestinian territories, has a history of antisemitism but has not faced any repercussions from the UN or issued a clear apology.

Albanese said during a 2014 conflict between Israel and Gaza terror groups that the âJewish lobbyâ was in control of the United States.

She has also sympathized with terror organizations, dismissed Israeli security concerns, compared Israelis to Nazis, accused the Jewish state of potential war crimes, said Israel controlled the BBC, and claimed that the Jewish state started wars out of greed.

Albanese attempted to distance herself from the comments in a statement to The Times of Israel, but since the report exposing the comments last month, has denied that the comments are antisemitic and brushed off criticism as âyet another politically motivated attack.â

A member of a UN Commission of Inquiry into Israel, Miloon Kothari, has also made antisemitic statements and remains in his position.

âItâs clear from Ms. Albaneseâs statements that these comments were not simply a mistake, but rather a fundamental part of her worldview,â they said. âInstead of taking responsibility for repeating age-old antisemitic tropes and her incitement to violence, Ms. Albanese attacks those who notice her public comments.â

âYou have stated that âthere is no room for antisemitism in the UN,â but it seems you have room for Special Rapporteur Albanese and others who have repeatedly made statements that are antisemitic,â the letter said.

The Congress members said Albaneseâs rhetoric is part of an anti-Israel pattern at the UN, noting that the General Assembly passed more resolutions criticizing Israel than against all other countries combined last year. The letter also noted Kothariâs statements and antisemitism by the employees of the UN agency for Palestinian refugees, UNRWA.

âThis pattern seriously undermines not only the UNâs credibility on issues in Israel and the Palestinian territories, but also the UNâs commitments to its own chartered principles of tolerance, equal treatment, and impartiality,â the letter said. âWe urge you to demonstrate that the UN is capable of genuinely addressing antisemitism by removing Ms. Albanese from her post.â

âNo one should get a free pass for engaging in antisemitism â including at the UN,â Sherman said...

In July last year, Kothari, a member of the UNâs commission of inquiry looking into alleged Israeli crimes, said that social media was âcontrolled largely by the Jewish lobby.â He also questioned why Israel was allowed in the UN. He later apologized after coming under heavy pressure but remains in his position.