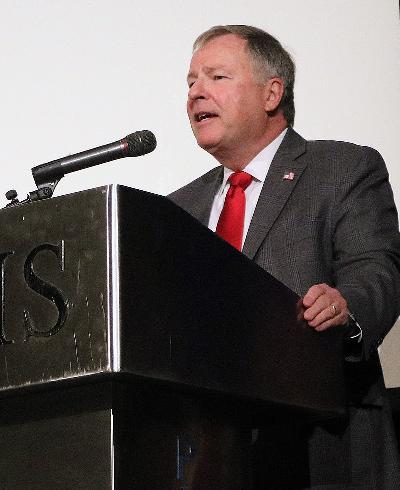 Congressman Doug Lamborn (File photo courtesy Wikimedia Commons)
"Today, Congressman Doug Lamborn led a bipartisan letter with 23 of his colleagues to the Secretary of State to express their deep concerns regarding recent comments by Miloon Kothari, a member of the United Nations Human Rights Council Commission of Inquiry (UNHRC COI) and said-to-be âhuman rights expert.â Kothariâs comments were clearly indicative of antisemitism and inherent bias against Israel and the Jewish people. His statements are proof of the discriminatory nature of the unwarranted investigation into Israel.

âThe comments by Mr. Kothari validate the deepest concern that allies of Israel have shared since the United Nations Human Rights Council initiated its disgraceful and never-ending investigation of Israel,â said Congressman Lamborn. âAn individual who is fundamentally biased against Israel and the Jewish people has no right serving in a position of authority over an already outrageous commission. The United States should insist that Mr. Kothari be removed from the COI into Israel immediately, and work with like-minded nations to counteract the harmful work being done by the UNHRC until its mandate is justly brought to an end.â

In the letter the Members state, â. . . the COIâs unprecedented and open-ended investigation into âalleged violations of international humanitarian law and â¦ abuses of international human rights lawâ applies equally to individuals or groups within Israel and the Palestinian Territories However, the resolution for the COI makes no mention of Hamas or Palestinian Islamic Jihad â U.S. designated terrorist organizations, and makes no allusion to or mention of Israelâs inherent right to defend itself and its citizens.â

They continue, âRather than focusing on specific incidents in 2021, the COI is empowered to take actions such as accusing Israel of war crimes and, amazingly, claiming that Israel is also responsible for Hamasâ war crimes through a convoluted framing of a legal case. The COI is further empowered to consider, as Mr. Kothari puts it, how to âtackle this issue of how far you can take antisemitism.â No matter which way you interpret that statement, this constitutes flagrant discrimination against the plight of the Jewish people.â

âThe United States should not stand for these types of remarks coming from an activist with blatant prejudice and discriminatory agenda. According to COI chairwoman Navi Pillay, members are âof an independent, impartial, and objective body of the United Nationsâ and yet Mr. Kothari has clearly gone into this investigation with findings and conclusions pre-determined. At a minimum, we request that you demand full disclosure from the UN High Commissioner regarding the selection of Mr. Kothari on the COI and demand his immediate removal.â

The Members conclude, â. . . we call on the Biden Administration to work with like-minded partners and stand up for Israel when the Commissionâs report is considered by the UN General Assembly in September. . . The Administration must demonstrate its commitment to defend Israel from discrimination through concrete action, not just rhetoric. Mr. Kothariâs boast that âthe U.S. failed quite badly at the Council this year to do anything to usâ should not be the last word on this matter.â

âMiloon Kothariâs comments indicate a deeply prejudiced conviction of Israelâs illegitimacy and demonstrate that the Commission of Inquiry is incapable of objectively executing its mandate,â said JINSA President and CEO Mike Makovsky. âThe Biden administration should take immediate measures in Geneva and at the UN General Assembly to put a stop to this egregious use of U.S. taxpayer dollars and ensure that the COI is eliminated.â