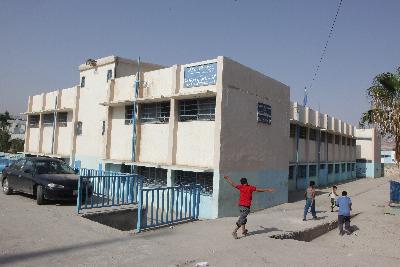 An UNRWA school (File photo courtesy Wikimedia Commons)
"The EU on Tuesday failed to pass a proposal to withhold about 5% of its support for the Palestinian Authority in light of antisemitic incitement from its textbooks, after 14 months of freezing funding.

Instead, the European Commission â whose president, Ursula von der Leyen was in Israel on Tuesday â decided to pay the PA without new conditions, despite the findings of an EU-commissioned study by the Georg-Eckert Institute confirming in June 2021 that Palestinian textbooks feature antisemitism, glorification of terrorism and erase Israel.

The European Commission approved a â¬224.8 million aid package for the Palestinians on Tuesday, in addition to previous contributions of â¬92m. to UNRWA and â¬25m. specifically for humanitarian aid. The EU projected â¬1.152 billion in financial support for the Palestinians for the years 2021-2024.

Last September, Prof. Dr. Eckhardt Fuchs, director of the Georg-Eckert Institute, told the European Parliament 2021 while some books follow UNESCO standards, 'in other subjects they do not. Here you find incitement to hatred, antisemitic parts, and this we have said very clearly and differentiated.'

Thirty-two members of the European Parliament from several parliamentary groups called on von der Leyen in a letter this past March to set conditions for funding the Palestinian education sector.

'Years of negotiations with the PA and repeated Commission pledges of âzero toleranceâ for antisemitism have unfortunately failed to bring about the desired change,' the letter said. 'Palestinian children continue to be abused as they are being taught to hate. Asking the PA to revise these books is not an imposition but a self-evident and non-negotiable duty.'

When the European Parliament reviewed the 2021 budget in April, it condemned incitement in Palestinian education and demanded that 'all text books and materials supported by Union Funds which are used in schools must be in line with UNESCO standards of peace, tolerance, co-existence and non-violence.'