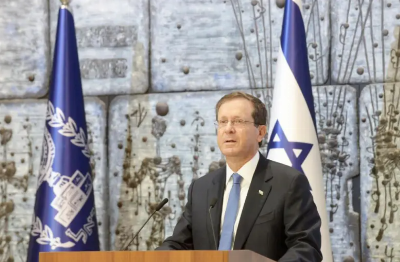 Herzog was speaking at the annual state reception hosted just ahead of Rosh Hashanah by the president of Israel and the Foreign Minister for the foreign diplomatic corps.

Several countries with which Israel has diplomatic relations have already opted out of the conference, realizing that it will be used as a platform for antisemitism and Israel-bashing..."
Date
September 2, 2021
Title
Herzog asks foreign diplomats to urge their nations to boycott Durban Conference, The Jerusalem Post
Author(s)
Greer Fay Cashman
Original Source
https://www.jpost.com/israel-news/herzog-asks-foreign-diplomats-to-urge-their-nations-to-boycott-durban-conference-678529
Attachment
Click here to view this article in MS Word/PDF format