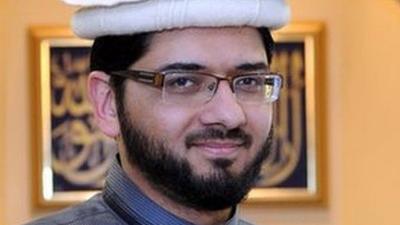 Qari Asim (Mosque Handout Image)
"An imam has been dismissed as a government adviser after backing calls for a film about the Prophet Mohammed's daughter to be banned.

Qari Asim, 44, was removed from his role as an Islamophobia consultant after protests against the film The Lady of Heaven.

Mr Asim said he did not attend or organise any of the protests.

In his response to the decision, published on Twitter, he said the government's contention he had acted to undermine democratic values was âinaccurateâ.

Mr Asim, who was appointed MBE in 2012 for building âcommunity harmonyâ in Leeds, added he was concerned the film ârisked fuelling extremism and tension in communities that would undermine cohesion in British societyâ.

On Wednesday, cinema chain Cineworld cancelled all UK screenings of the film after protests outside a number of cinemas.

Mr Asim, imam of the Makkah Masjid mosque in Leeds, was told his appointment as deputy chair of the government's Anti-Muslim Hatred Working Group had to end in a letter from the Department of Levelling Up, Housing & Communities.

It said: âYour recent support for a campaign to limit free expression - a campaign which has itself encouraged communal tensions - means it is no longer appropriate for you to continue your work with government in roles designed to promote community harmony.â

The solicitor was told his actions were âa clear effort to restrict artistic expressionâ and that the campaign had âled to street protests which have fomented religious hatredâ..."
Date
June 12, 2022
Title
Imam removed as U.K. government adviser over film protests, BBC News
Original Source
https://www.bbc.com/news/uk-england-leeds-61771695
Attachment
Click here to view this article in MS Word/PDF format