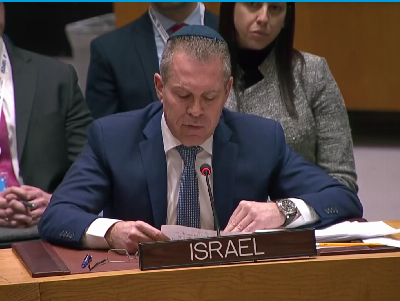 Ben-Gvir, a controversial far-right figure in Israel's government, visited the holy site in Jerusalem on Tuesday, sparking backlash and widespread criticism of what many called a âprovocativeâ move. The Temple Mount is where Israel's First and Second Temples stood and is the holiest site in Judaism. It is also the site of the Al Aqsa Mosque, the third-holiest site in Islam.

After his ascent, the UN-SC said it would hold an emergency session to discuss the first visit by an Israeli government minister to the Temple Mount in five years. While government ministers have come to the holy place in the past, it remains a flash point for escalations between Palestinians and Israelis...

Ahead of the UN-SC meeting, Israelâs UN envoy Gilad Erdan said in a press briefing that he was âtruly shocked.â

âThere is absolutely no reason that this emergency session should be held. To hold it on a non-event is truly absurd,â he said. âWhy are we holding an emergency session for something as simple as a Jew walking to the holiest site in Judaism?â

Erdan further pointed to events going on elsewhere in the world which he suggested the council was not responding to nor holding emergency sessions for, urging there was a double standard when it comes to the Jewish state."
Date
January 5, 2023
Title
Israel condemns U.N. Security Council session on Ben-Gvirâs ascent to Temple Mount, I24 News
Author(s)
Mike Wagenheim
Original Source
https://www.i24news.tv/en/news/israel/diplomacy/1672949726-israel-condemns-un-security-council-session-on-ben-gvir-s-ascent-to-temple-mount
Attachment
Click here to view this article in MS Word/PDF format