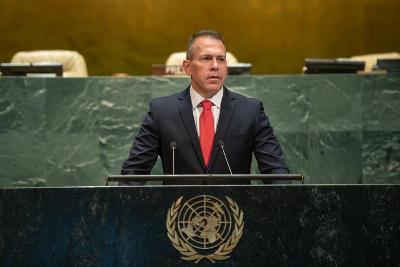 It wants the GA to take a stand on Holocaust denial on January 20, the 80th anniversary of the Wannsee Conference, where the Nazi 'Final Solution' was approved.

'The passing of this resolution is of great importance so that the shocking phenomenon of Holocaust denial becomes a redline in the international arena,' Israelâs Ambassador to the UN Gilad Erdan told reporters on Wednesday.

The Israeli resolution 'urges all member states to reject without any reservation any denial of the Holocaust as a historical event, in either full or in part, or any activities to this end.' It asks 'member states and social media companies to take active measures to combat antisemitism and Holocaust denial' through 'information and communication technologies,' and to facilitate the 'reporting of such content.'

The draft text also calls on the UN to develop programs to combat Holocaust denial.

Erdan said that this resolution marked the first time in 17 years, and only the second time in UN history, that the General Assembly was expected to approve an Israeli-authored text.