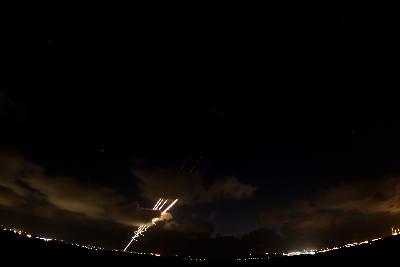 Rockets from Gaza (File photo courtesy Wikimedia Commons)
"Israel slammed the latest UN report on the May 2021 Gaza conflict on Tuesday and said it was heavily biased in favor of Palestinians after its authors blamed Israel's âperpetual occupationâ of Palestinian areas for the flare-up.

The findings were in the first report by a commission of inquiry headed by a three-person team of human rights experts. It was set up last year by the UN-backed Human Rights Council following an 11-day flare-up between Israel and Hamas in Gaza.

The commission, headed by former UN human rights chief Navi Pillay, is the first to have an âongoingâ mandate from the UN rights body. Critics allege that permanent scrutiny testifies to an anti-Israel bias in the 47-member-state council and other UN bodies.

But the report, which comprises 18 pages, contains only a few paragraphs about the indiscriminate rocket fire from Gaza on Israeli population centers, with only passing references to the role played by terrorist groups such as Hamas in perpetrating these attacks. The rest of the report is almost entirely dedicated to bashing Israel with unsubstantiated allegations of discrimination and racism while going into lengthy detail on Israel's military action in the operation without the proper context of self-defense.

The Foreign Ministry rejected the report as âpart and parcel of the witch hunt carried out by the Human Rights Council against Israel.â The ministry further said that the report âa waste of money and effort,â adding that âit is a biased and one-sided report tainted with hatred for the State of Israel and based on a long series of previous one-sided and biased reports.â

The ministry accused commission members of ignoring Palestinian violence, incitement and antisemitism. âThe commission members, who claim to be objective, were only appointed to their roles because of their public and well-known anti-Israel stances, in direct opposition to the rules set out by the United Nations,â it said.

The report largely recaps efforts by UN investigators over the years to grapple with the causes of Mideast violence and the authors acknowledged it was in part a âreviewâ of previous UN findings.

âWhat has become a situation of perpetual occupation was cited by Palestinian and Israeli stakeholders to the commission as the one common issueâ that amounts to the âunderlying root causeâ of recurrent tensions, instability and protracted conflict, the authors wrote. They said âimpunityâ for perpetrators of violence was feeding resentment among Palestinians in the West Bank, Gaza and east Jerusalem.

The report's authors cited âcredibleâ evidence that âconvincingly indicates that Israel has no intention of ending the occupationâ and has plans to ensure complete control of Palestinian areas.

The report also voiced criticism of Palestinian leaders, saying the Palestinian Authority frequently refers to the âoccupationâ as a justification for its own human rights violations. It also points to the âoccupationâ as the core reason for the failure to hold legislative and presidential elections, the authors said. The PA is widely criticized for corruption and intolerance for dissent.

As for Hamas authorities in Gaza, the commission said they show little commitment toward upholding human rights and little adherence to international law. Since seizing control of Gaza in 2007, Hamas has shown little tolerance for political dissent and has been accused of torturing opponents.

While prompted by the 11-day May 2021 conflict in which 250 Gaza Palestinians and 13 people in Israel died, the inquiry mandate includes alleged human rights abuses before and after that and seeks to investigate the âroot causesâ of the tensions."
Date
June 7, 2022
Title
Israel says U.N. report on 2021 Gaza conflict ‘tainted with hatred’, Israel Hayom
Author(s)
Tamir Morag, Ariel Kahana, AP, Reuters and ILH Staff
Original Source
https://www.israelhayom.com/2022/06/07/israel-says-un-report-on-2021-gaza-conflict-tainted-with-hatred/
Attachment
Click here to view this article in MS Word/PDF format