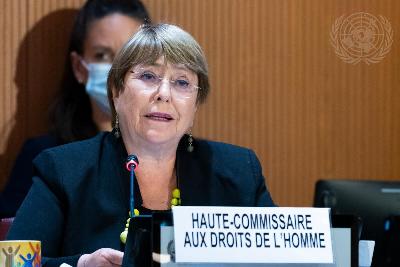 The Israeli mission to the UN in Geneva, where Bacheletâs primary office is located, stated, âA cursory look at the UN Human Rights Office in Ramallahâs website or Facebook page reflects this uncomfortable truth.â

Israel, it recalled, had cut its ties with Bacheletâs office in 2020, after she published a âblacklistâ of companies that engaged with Israelis and Jewish entities located in West Bank settlements, east Jerusalem and the Golan Heights.

Bachelet is due to end her four-year term on Wednesday and no replacement has been announced.

Israeli authorities 'trying to hide something,' UN commissioner alleges On Tuesday, she attacked Israel for not issuing visas to her staff, who either need to visit or be located in Israel and Palestinian territories...

Israelâs mission to the UN retorted that âit is of little surprise that Michelle Bachelet is using her last hours in office to once again attack Israel and yet remain silent on the most serious human rights situations around the world.â

âHer words today are nothing more than a blatant attempt to rewrite the history and legacy of her time in the role of High Commissioner,â it added.

âDespite her claims, over the past two and a half years, her office has not engaged in genuine dialogue with Israel or provided any solutions or remedy to the situation she describes.

âShe has also spent years, despite her claims today, refusing to name Hamas and the Islamic Jihad, and refusing to condemn violations of human rights by the Palestinians,â Israelâs mission to the UN stated.

Her office âhas never intended to be anything but a mouthpiece for the Palestinian Authority,â it proclaimed.

Israelâs mission to the UN said it hoped that her replacement would undo the harm she had caused and finally commit âto eliminating the bias against Israel at the Human Rights Council.â"
Date
August 30, 2022
Title
Israel: U.N. human rights office is a mouthpiece for Palestinian Authority, The Jerusalem Post
Author(s)
Tovah Lazaroff
Original Source
https://www.jpost.com/arab-israeli-conflict/article-715904
Attachment
Click here to view this article in MS Word/PDF format