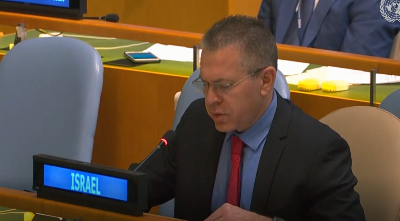 Israeli Ambassador to the U.N. Gilad Erdan (File photo)
"Israelâs permanent representative to the United Nations, Gilad Erdan, criticized the body on Monday for commemorating the voting anniversary of the 1947 partition plan with an event held in solidarity with the Palestinians.

The plan, known as Resolution 181, called to partition the area of British Mandatory Palestine into two states - one Jewish and one Arab.

In 1947, the UN General Assembly approved the resolution, which was accepted by the mandateâs Jewish population, but rejected by the Arabs.

'Israel accepted this partition plan... the Palestinians and the Arab countries rejected it and tried to destroy us,' Erdan said in a video message marking the occasion on his Twitter page.

'They also persecuted, massacred, and ultimately expelled the Jewish communities in their own countries. Shockingly, this atrocity is completelyâ¦ ignored by the UN.'...

The official denounced the international body for holding a solidarity event 'on the anniversary of the Palestiniansâ own decision to choose violence.'