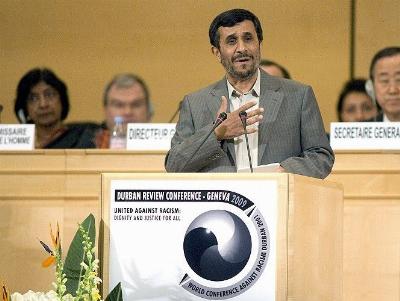 Mahmoud Ahmadinejad at the Durban Review Conference in 2009 (File photo)
"Italian Prime Minister Mario Draghi knows very well that he must not allow the shame of past Durban conferences to regain the world stage.

French President Emmanuel Macron already did so, by announcing earlier this month that France would not participate in the upcoming fourth session of the 2001 conference thatâunder the auspices of UNESCO and with the bogus title 'Conference Against Racism, Xenophobia and Intolerance'âestablished the theoretical and political basis for the current wave of lethal anti-Semitism.

This surge in what the late historian Robert Wistrich called the 'longest hatred,' which includes rabid anti-Zionism and doesnât hide its genocidal purpose, is particularly dangerous, as it has no geographical boundaries, is intertwined with terrorism and violence and cloaks itself in the veil of 'human rights' and 'legitimate criticism' of Israel.

Durban IV, slated to take place on Sept. 22, has already been rejected by the United States, Canada, Germany, Israel, the Czech Republic, the United Kingdom and the Netherlands. Italy must follow suit.

At the first 'anti-intolerance' conference in Durban, South Africa 20 years ago, the slogans declaring Israel to be a racist, apartheid and genocidal state were not only hateful; they were lies. The Jewish state, in fact, is passionately democratic.

In Durban, the idea of Israelâs 'illegal occupation' was devisedâagainst all historical and legal discussionsâin defiance of the Oslo Accords, signed by then-Israeli Prime Minister Yitzhak Rabin and PLO chief Yasser Arafat.

As a correspondent for the press in 2001, I covered the first Durban conference in disbelief, hearing, day after day, how Arafat, Cuban dictator Fidel Castro and Zimbabwean tyrant Robert Mugabeâwith their fierce anti-Americanism and anti-Israelismâtook turns ranting from the podium. They peddled their anti-Semitic hatred without let-up, calling Israel an apartheid state and a zombie of contemporary colonialism that had to be brought to an end and talking about the 'Palestinian state' that never existed as though it were the symbol of salvation.

This was at a time when Palestinian terrorists were waging what they called the 'Al-Aqsa Intifada,' a suicide-bombing war against innocent women and children in the streets of Jerusalem. In Durban, meanwhile, Jews were viewed as an inferior race of Christ-killers and infidel invaders of Islam.

Perplexed participants from around the world left the dimly lit venue and went into the corridor to seek an impossible agreement on resolutions. From the Italian contingent, Margherita Boniver stood up courageously. When we met in the hallway, we exchanged desperate words. During breaks, I met other Jews like myself, who were treated as outcasts and prevented from speaking.

The ever-mobilized NGOs, some of whose representatives were wearing Keffiyehs, distributed anti-Jewish material, such as The Protocols of the Elders of Zion, and terrorized the Israeli delegation.

The Tutsis, the Tibetans, the Guatemalans (proud of their Nobel Peace Prize laureate Rigoberta MenchÃº, wandering around the place in her customary multicoloured robes), the 'Untouchables' from India, the Uighursâ¸ºall the oppressed peoplesâwere reduced to extras in the well-planned war against Israel.

By going to Durban next month, we risk reviving once-prevailing racist theories. The shame of celebrating such an occasion must be avoided for the sake of humanity.

Accusations of genocide and racism against Israel, which delegitimize its very existence, are the prime fodder for the ever-growing contemporary anti-Semitic movement, which has recently added the misnomer 'white supremacism' to its disgusting list of descriptions to depict the Jewish state.

In the same vein as the hate-fest in Durban two decades ago, crowds todayâunder the banner of 'human rights,' with Muslims against Islamophobia or blacks against racism ('Black Lives Matter')âshout that 'Palestine will be free,' and demand the elimination of Israel.

In London, for example, protesters were recently heard shouting 'f**k the Jews.' in Los Angeles, diners at a restaurant were accosted by someone asking, 'Who here is Jewish?'

Prime Minister Draghi, please let us turn off this tap of hatred, which over the years has passed into the hands of Libyan dictator Muammar Qaddafi and Iranâs former president, Holocaust-denier Mahmoud Ahmadinejad.

In 2001, beneath the skies of a South Africa freed from apartheid, this reporter saw the posters of Osama Bin Laden raised high in the air. A mere few days later, back in Jerusalem, I witnessed the disaster on 9/11 that changed the world in which we live."
Date
August 23, 2021
Title
Itâs Italyâs turn to shun the Durban conference, JNS.org
Author(s)
Fiamma Nirenstein
Original Source
https://www.jns.org/opinion/its-italys-turn-to-shun-the-durban-conference
Attachment
Click here to view this article in MS Word/PDF format